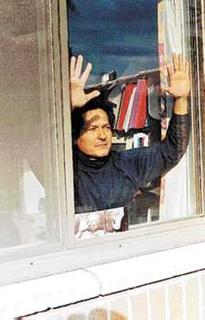 Francisco Santo's Undressing the Night, translated by yours truly, is still on its way. Some 100 copies were mailed to me and to Francisco -- 20 copies each by priority post, the rest by regular post -- on Sept. 20 from Norberto Salinas of Editorial Lunes, Costa Rica... and we're still waiting. Francisco received some ten copies mailed hot off the press (this expression is quite literal... the books come very warm off these presses) 2 weeks before, but DHL, a certain courier service in Costa Rica, has turned out to be very slow (what else is new? are all the others are slow down there, too.) "Ese DHL es un tormento..." wrote Francisco to me in an e-mail a couple of days ago. Are they reading and critically assessing each copy before they send them? I think a pony express would have made it sooner.

In the meantime, I've created a blog site -- undressingthenight.blogspot.com -- that brings together the forward, commentary, and other related materials on the book, most of which have appeared or will appear in this blog. A growing compendium of resources for that worthy few...

Above is a photo I took of Francisco when he visited me two summers ago here in Montreal. Together that day we had gone to an extraordinary card shop on Rue St-Denis where he'd picked up a rare photo card of Pablo Picasso, Pablo peering out, his hands against the window as if trapped inside. Here, Francisco Santos poses behind my office window doing the same thing. That was the idea anyway -- but the PP photo, down in the left corner of the window, is scarcely visible. Probably better that way -- how many know of that photo anyway? (Well, more do now.) A suitably cropped version appears on the back of the book. As soon as the book arrives, you'll see a scan of the cover. In the meantime, every morning finds me peering into my mailbox for that parcel delivery card.
Posted by Brian Campbell at 5:58 pm