Geez and The Sun

The other day I read a good deal of my contributor's copy of Geez. I hadn't really read it thoroughly before.

In a lot of ways it reminds me of The Sun, a review published out of Chapel Hill, North Carolina, to which I subscribed for a couple of years. Both magazines pride themselves on being completely subscription-based (thereby answerable to no advertisers), liberal-left while highly skeptical of the cliches of the left, compassionate in tone, featuring poetry, fiction and heart-rending personal testimony by "ordinary folks like you and me." Both magazines I'd pick up from a coffee table before a great many others. Both engage and put me off in a number of ways. 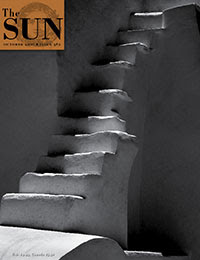 The Sun is an especially high quality product -- I used to say I loved this magazine, and feel a considerable affection for it yet -- but after a while, let's say a good year of subscribing and a couple of turned back submissions, I came to realize it's all the same. The poems, mostly plain-verse down-home testimonies, seem poetic versions of "readers write" testimonies, and its short stories, the editor's notes, and many feature articles follow much the same tone, diction, etc. (I feel an editorial hand shaping the Reader's Write letters, so uniform they are in stylistic feel ). I must add that the feature articles -- featuring highly insightful interviews with or essays by the likes of Noam Chomsky, Michael Shellenberger, even Li Young Lee -- are of the highest order of thoroughness, professionalism, and insight. The profoundly beautiful but insistently b/w photos set the tone and somewhat retro look of the magazine. But for me, at least, the formula ceased to intrigue...so I decided to put my limited subscription monies elsewhere for a while.

Geez is more eclectic in its editorial input; each issue, playfully, whimsically and yet deadly 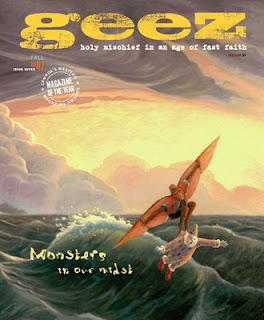 seriously deals with a single theme. This one was "monsters" -- the monster within, the monster without, the monster of fantasy, the monster as secret police and hidden enemy (that's were my poem comes in), even grace and inspiration as monster. While none of the feature articles has the authoritative breadth and depth of those in The Sun, here we have quite a revealing expose by a priest/community worker of a Canadian mining company's exploitation of Guatamala, a decent factual profile of Blackwater, quite well-written personal essays on various aspects of the topic. And beautifully illustrated with b/w photos, drawings, and a fantastic colour cover.

What I find off-putting myself is that many of its articles are overtly Christian in reference if not emphasis... even though the editors insist on the submissions page, "Geez does not assume a Church insider audience. If you’re Christian, only send your piece if your sharpest non-churched friend likes it." Non-churched? As a non-Christian, I still feel like an outsider as I read though a fair number of its pages. Theirs, however, is an underrepresented contingency -- Christians or ex-Christians concerned with matters of faith and value, neither "Born Again" nor "Moral Majority" (and I mean those *scare* quotes) -- to which I can quite well relate.

There's one excellent thing about Geez, tho: not only did its poetry editor invite me to send in the poem, but they paid me for it as well -- as "modest honorariums" go, quite generously I should add.
Posted by Brian Campbell at 11:35 pm