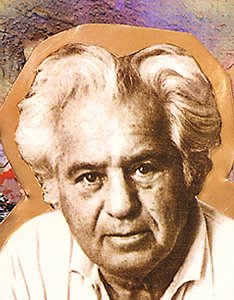 On the day of his death, I posted the poem Against this Death below as well as in the comments box of Silliman’s blog. It seemed a fitting epitaph for the man – and to counter (as far as my influence may extend, which seems pretty minimal, but actually hard to determine what with Google & all) the pat assessments already floating around dismissing his poetry as bombastic, misogynistic, etc.

Up in these parts, especially at about the time I started seriously reading and writing poetry around 1980 or so, Irving Layton was a force to be reckoned with. He was Canada’s best known, celebrated, awarded, most controversial poet – a true media star, the quintessence of literary lion. In my childhood I had watched him arguing vociferously with the likes of Nathan Cohen, Pierre Berton & Robert Fulford on CBC’s TV's weekly Fighting Words. He became the only Canadian to be nominated for the Nobel Prize. One of the first books of poetry I ever got was his Governer General's Award-winning Red Carpet for the Sun – which remains, in memory at least, a fabulous creation. Looking back on it now, I can’t help but admit he was – and probably still is – a huge & seminal influence. Returning to the national scene, I’m quite sure he’s the last poet I’ll ever see whose death will rate front page coverage and full-page testimonials in the all major newspapers up here… not to mention major spots on the television news, etc. (Leonard Cohen’s passing, I’m quite certain, will get still greater coverage, but he is far better known as a singer-songwriter than as a poet.)

It’s also indicative of Canadian attitudes that in all that coverage, precious little of his actual poetry got aired. Quips and barbs, yes. A few nice, sentimental lines on the front page of The Montreal Gazette. And this oft-quoted thing, on an inside page, flanked by two big pictures:

I placed
my hand
upon
her thigh.

By the way
she moved
away
I could see
her devotion
to literature
was not
perfect.


Ha ha. A poetic quip that still makes me smile. But… GG Award? Nobel Prize? What a goddamned joke!

This is (it pretty well goes without saying) a prose continent. The journalists and reviewers, if & when they cover it at all, actually manage to block access to poetry. I think they’re actually ashamed of it, afraid of admitting being moved enough by it to print it, afraid it will compromise their so-called professionalism. It’s a curious phenomenon. Compare with Latin America, where national dailies like Mexico City’s Excelsior or Managua’s La Prensa print whole poems – passionate, lengthy poems, not just jokey things -- in their weekly cultural section.

I’m having fun writing this. But it’s time to go to bed. To be continued....

P.S. Well, it's way past my bedtime. Just saw the Toronto Globe and Mail, which my partner had bought earlier in the day -- it seems to their credit they did far better than the Gazette or CBC. Two complete poems in the review section. A Canadian first, I think.
Posted by Brian Campbell at 1:55 am

Gawd, the thought of Irving Layton on the CBC takes me back to the wonderful country I left fifteen years ago. I'm going to find some back issues of Maclean's and pop open one of my secret stash of Coffee Crisps.

They must be pretty stale by now.

Coffee Crisps are a Canadian exclusive, along with the even more estimable Aero bars. I have a secret connection in Winnipeg who sends me some when I run low.

You went expat for the high-grade candy? I'll add that to the list of reasons people move to the Great White North, along with free health care, same-sex marriage, peaceful co-existence with the world and semi-legal reefer.

Little did I know... I assumed EVERYONE ate Coffee Crisps AND Aero Bars, and that they were made EVERYWHERE (except Quebec.)