In a 1919 essay called "The Sociology of Imperialisms", the Austrian economist Joseph Schrumpeter wrote:

There was no corner of the known world where some interest was not alleged to be in danger or under actual attack. If the interests were not those of Rome, they were those of Rome's allies; and if Rome had no allies, then allies would be invented. When it was utterly impossible to contrive such an interest--why, then it was the national honour that had been insulted. The fight was always invested with an aura of legality. Rome was always being attacked by evil-minded neighbours, always fighting for a breathing space. The whole world was pervaded by a host of enemies and it was manifestly Rome's duty to guard against their indubitably aggressive designs.

Substitute Washington for Rome... As things change, so they stay the same. 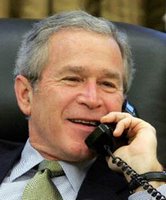 As for our elections here... well, I'm sure George Bush is very pleased (that's him on the phone with Stephen Harper yesterday, reputedly). If Harper actually governs well -- which I have a fair hunch he is capable of doing, despite his party platform and the wacky Christian Right elements in that party -- we could be in for a long legacy of Conservative government, with their accompanying systematic

neglect of social programs, the public medical system, arts funding, etc. Hence I find myself actually hoping (against hope, since our collective burden of cynicism is already heavy enough) that his will be another scandal- and blunder-ridden government like so many Conservative governments in the past, and they'll get turfed out of there.

Anybody willing to take bets?
Posted by Brian Campbell at 1:35 am