Howl to you too, babe 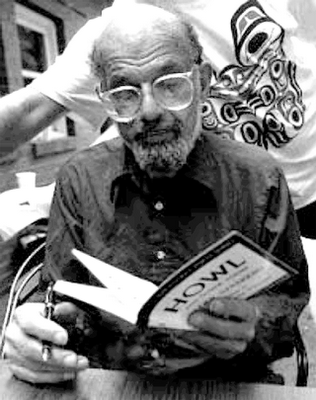 A few days ago friend of mine passed along from the April 9 New York Times Book section a review of The Poem That Changed America: "Howl" Fifty Years Later, a book of reminiscences edited by Jason Shinder.

Here for me is the most memorable passage of that review, particularly the Luc Sante quote starting two paragraphs down (I include the first two paragraphs because they provide some interesting context; the whole review can be found here):

Ginsberg wrote "Howl" in San Francisco and Berkeley; he read the long first section in public for the first time in San Francisco in 1955, and the whole of the poem for the first time in Berkeley the next year. (A CD of that performance is included in this book.) All sorts of divisions, exclusions, restrictive manners and deferences that were second nature in the East were missing in the Bay Area. If the primary terrain of the poem is New York City, the freedom one could find in California in the 50's is crucial to the air that blows through the dank rooms of "Howl," blowing all the way back to New York --but you wouldn't know it from the Eastern writers Shinder has brought together, as if such Bay Area poets and critics as Ishmael Reed,Robert Hass, Rebecca Solnit, Joshua Clover or Richard Candida Smith would have less to say about where "Howl" came from and where it went than Jane Kramer and Eileen Myles, who have plenty to say. The America that gets changed in "The Poem That Changed America" is a Steinberg map, with San Francisco as far away as Tangier. "No one," Marjorie Perloff says off-handedly, but too revealingly, "New Yorker or foreigner. . . . "

You can forget that when Luc Sante begins to tell his tale from 437 East12th Street, which is, as it happens, the same New York City building where Ginsberg lived... Sante changes the discussion as if throwing open a door: "Was 'Howl' the last poem to hit the world with the impact of news and grip it with the tenacity of a pop song?" The language is burning, the ideas are jumping and, finally, you are brought into the adventure of the poem, Ginsberg and his fellows turning New York City into their own frontier, then heading west, through Kansas, into Colorado, to the coast, then back again, discovering, you can feel, more of America in the decade before Ginsberg wrote the poem in 1955 than de Soto, Daniel Boone or even Lewis and Clark did in the centuries before them.

"Reading 'Howl' aloud or reciting it," Sante writes, "you could feel the poem giving you supernatural powers, the ability to punch through brick walls and walk across cities from rooftop to rooftop" faster than a speeding bullet, more powerful than a locomotive, able to leap tall buildings in a single bound, as George Reeves was doing on TV as Ginsberg wrote, just like Scotty Moore's second guitar break in Elvis Presley's "Hound Dog," on Ginsberg's hydrogen jukebox the year that "Howl" first made it into print. Why not? Sante lived for 11 years in Ginsberg's building. He was 36 when he moved out, and when he looks back to that moment, the self-regard of adolescent illumination, so common elsewhere in the pages Sante shares, is replaced by something that doesn't melt at the touch.

"'Howl' probably meant more to me then than ever before," he says, "because finally I could reconcile it with my own experience. 'Poverty' and 'tatters' and 'hollow-eyed' and 'high' were more than poetic figures by then. I could compile my own list of the best minds of my generation destroyed by madness. The decade during which I lived two flights down from Allen was particularly notable for its body count in suicides and overdoses, and those cadavers really had contained some of the best minds I knew. . . . If 'Howl' is a catalog of flameouts and collapses, it is ecstatic in its lamentation. And that is the basic measure of its strength: it is a list of . . . leprous epiphanies as redoubtable as Homer's catalog of ships, but rather than stopping at that, it seizes the opportunity to realize all the botched dreams it enumerates. It envisions every broken vision, supplies the skeleton key that reveals the genius of every torrent of babble, reconstitutes every page of scribble that looks like gibberish the next morning."
Posted by Brian Campbell at 1:54 am