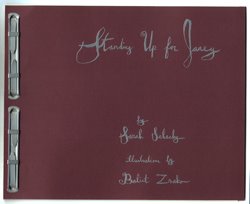 Today (oh-now yesterday) was the deadline to submit ms. to Dilirium Press' Poetry Chapbook Contest. Delirium, founded by two Concordia creative writing students, is the one local press I know of that specializes in beautifully designed, hand-sewn and custom-made limited edition chapbooks and broadsides. On the left is the cover of Sarah Selecky’s Standing Up for Janey, which I picked up back in -- when was it? Late February? -- at a well-attended launch at Zeke's Gallery. Was impressed with what I heard of the writing in that one but also with the artistic production... somehow, though, it got mislaid and I haven't gotten around to reading it. Probably under something, or wedged between two other books on a shelf somewhere. Common problem with chapbooks.

I sent in two submissions so different that if the judge has to choose just one, well, it will be quite an aesthetic dilemma (not to mention, of course, all the other submissions. Multilemma is doubtless the more appropriate term.) But it's not clear in the contest rules how many ms.will be chosen, nor when the final choices will be announced.

Having that contest deadline though turned out to be well worth the price of admission. As often happens when we put these kinds of things together, it became a highly stimulating exercise just juxtaposing the poems in various arrangements. I saw motifs operating that I had never noticed before, and brought the whole into balance by writing a couple of pieces I think of as "passing chords", since they really just serve to smooth the transition between otherwise disparate notes in the composition. The process also helped clarify directions these poems might take toward a possible book. (I'm sure many of you have experienced precisely the same thing in putting chapbooks together -- that could be their greatest value.) Another example of how publication -- or the attempt at such -- can be integral to not only refinement but creation...

Good luck, Brian. The way they put the winning chap together does indeed make the contest more special.