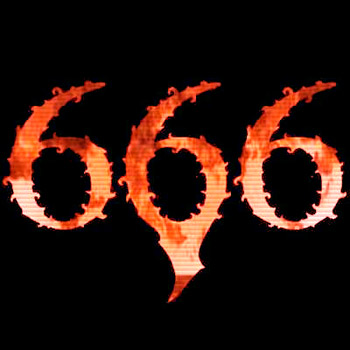 Today is a rarisima day on the calendar, a con-figuration which will only occur (concur) once: the sixth day of the sixth month of the sixth year, the biblical number of -- you guessed it -- THE BEAST.

Hexakosioihexekontahexaphobia is apparently the word for a fear of that number. Great word, eh? The challenge for you poets out there: to make it an endrhyme in a heroic (anti-heroic?) couplet. Or better, make it part of a haiku.

The age-old folk tale goes that if you mispronounce the word even once, you will be cursed through all eternity. (A folk tale I just made up -- ay, what a beastie I! -- he said, swishing his tale...)

According to the link above:

Ah ha! No wonder he hosted a late night show...

I'm not sure what hexakosioihexekontahexaphobes are supposed to do today. Nothing? Is that a good thing to do? (I think of the proverbial deer, frozen in the headlights...)
Posted by Brian Campbell at 6:16 am

Email ThisBlogThis!Share to TwitterShare to FacebookShare to Pinterest
Labels: Humour

Thanks for the hexakosioihexekontahexaphobia link Brian. Fun fun.