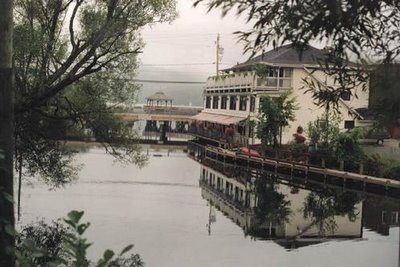 The Pilsen, where I wrote "North Hatley"

North Hatley, Quebec is an almost insufferably cute little tourist/cottage town twenty minutes' drive from Lennoxville (which, incidentally, was recently amalgamated into the city of Sherbrooke -- the locals, though, still call it Lennoxville). As I've taught at Bishop's University, Lennoxville, for the past seven summers, I've made more side trips here than I can count and spent more time here than, honestly, I could wish for. Once an exclusive country retreat for Montreal's Westmount wealthy, it now has a sizeable minority of Francophone residents. As with all towns like these up here, it is at its liveliest in the summer, and practically closes down in the winter. A number of the biggest mansions have been turned into pricey auberges (bed and breakfast inns) for the expense-account crowd. Conrad Black (that I'm quite sure) and other tycoons of his ilk have spent time here, as well as a some prominent members of the Royal Family (again, fairly authoritative heresay) and not a few from the underworld. Of the latter I'm certain: a major headquarters of the Hells is just down the road (well, in the other end of Lennoxville), a huge red-roofed house towering above a wooded hillside and surrounded by a rampart of high electrical fences topped by barbed wire. (The Hells, by the way, are unabashedly federalist-patriotic: above the house flaps a huge Canadian flag, perhaps the biggest east of Ontario. They're also, according to an ex- North Hatley waiter I know, hard drinkers and lavish tippers...or at least were. What with the latest prosecutions, they may be lying low.)

The town has several galleries of "naive" art, mostly trite things (gingerbread houses, apple-cheeked children, horses nuzzling under moonlight -- you get the picture, or rather, pictures) in golden frames done by wealthy women for wealthy women. Light summer theatre, weekly band concerts in one of two gazebos in the lakefront park (appropriately named Dreamland Park -- the lake, though, I must say is beautiful), restaurants with outdoor terraces, boat rides, ice cream -- well, that more or less rounds out this thumbnail sketch.

The poem was first-drafted two -- now three -- summers ago on the outdoor patio of The Pilsen Restaurant and Pub, on a Saturday afternoon after completing a yearly ritual: riding down the bike path from Lennoxville on a hot sunny day and quenching my thirst with a couple of beers on the terrace overlooking the water. The processions of pleasure boats on the river leading to Lake Massawippi were in full force, plenty of bikinis to ogle at (pls. excuse the synechdoche). I remember, too, being creeped out by some of the people around me -- square-jawed couples in mirrored sunglasses clearly on the take and the make, and indeed, some stockbroker or accountant type conducting frenetic financial transactions on his cellular.

French phrases I threw in (well, they came to mind before the English):

Funny, going back to North Hatley in the two summers since, the town seemed strangely innocuous. People I saw were not nearly as hard-edged as those I was exposed to at the writing of that poem -- rather, average, relaxed, friendly, even a little dowdy. Only last year I discovered the municipal beach, a humble stretch of sand serving mostly locals a fair piece down the road from the park. My partner and I also went to a couple of garage sales at some of the more modest, tumbledown cottages in town, chatted with their delightfully eccentric owners while picking up some interesting things. These experiences, of course, have given me other, extenuating perspectives. The poem -- like all poems, perhaps -- now seems the product of mercilessly selective attention. But then, the almost obsessive cuteness of the town is it's own exercise in denial -- and that, I think, I captured quite well.
Posted by Brian Campbell at 12:33 am

Email ThisBlogThis!Share to TwitterShare to FacebookShare to Pinterest
Labels: BC Poems