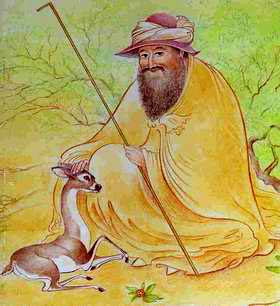 Hafiz
Rumi -- as translated by Coleman Barks and others -- is, according to this broadcast which aired a few weeks ago, the current best selling poet in the Western world, with Hafiz not far behind. Apparently, copies of Barks' The Essential Rumi have sold in the hundreds of thousands. According to Daniel Ladinky, translator (or version-maker) of Hafiz's "The Gift", the appeal of these writers is obvious: unlike so much poetry in the west, which has been singularly focussed since the early 20th C. on the shadow side of life, these 13th-15th C. mystics express unstinting joy, life, union -- all badly needed balm for the vexed and troubled spirit of this new millenium.

On the mornings when I chant -- yes I do indeed chant, it is my "shower on the inside" -- I like to read
daily reflections -- inspirations, quotes -- by not only
the likes of Nichiren Daishonin or Daisaku Ikeda, but also mystics from other traditions: Rumi, the Tibetan buddhist Sogyal Rinpoche (his Glimpse by Glimpse I recommend), and others. For the past few months I've been reading a poem a day from The Gift, after the Lotus Sutra recitation & I begin my Nam Myoho Renge Kyos. Many of these readings are indeed inspirational. Others, downright trite. Others a curious blend of brilliant and saccherine. Here, for example, is one:

A bird
comes and sits on a crystal rim
and from my forest cave
I hear singing,

So I run to the edge of existence
And join my soul in love.

I lift my heart to God
And grace is poured.

An emerald bird rises from within me
and now sits
on the Beloved’s
Glass.

I have left that dark cave forever
My body has blended with His.

Now I lay my wing
As a bridge to you

So you may join us
Singing…

I assume much of the music is lost in the translation. It has to be for this poet to be great. (There is even considerable controversy as to how much of Hafiz is left in these freewheeling "versions" by Lewinsky -- even if the book bills them as translations.) But the poet in me says, whatever the language, Hafiz -- or Ladinsky -- could have done well to cut all the lines after the first two stanzas: aside from that emerald bird, all they represent is cosmic syrupy yuk yuk -- and all that abstract God-talk is implied (indeed contained) in the beautiful images in those first two haiku-like stanzas.

But I love those first stanzas.

Three or four weekends ago I actually set elements of the above to music. At first I was only going to use those first stanzas --but then I found myself integrating other elements to complete the song. As a mystical song, it works well -- it doesn't sound forced or precious, like so much poetry put to music. To put it briefly , I got rid of the God-talk, and let the images speak for themselves. The song words go like this:

A bird
comes and sits on a crystal rim
and from my forest cave
I hear singing....

Now an emerald bird rises from within me
and sits
on the crystal
Glass.

I have left that dark cave forever
My body has blended with His.

Now I lay my wing
As a bridge to you

So you may join us
Singing…

Notice I replaced "is poured" with "pours in". Well, even with just nylon string arpeggios as accompaniment, the passive form Ladinsky used sounds like "is bored". I still feel there's a certain awkwardness in the final lines -- but song has gone over well with listeners, discerning friends + folk at the cafe I play in once a week. The music of course is integral. Someday, maybe, I'll master the technology to post recordings. Whether this ends up being *crystallized* into a recording or simply, like bird song, disappearing into silence.... well, it has resonated well for me.
Posted by Brian Campbell at 3:08 am