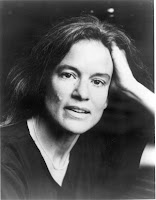 Strike Sparks, Sharon Olds' selected, was one book I'm glad I ordered: earlier this year I whipped through it in a matter of days. Her poems, cumulatively speaking, are simply a great read: "fire in the hands" Michael Ondaatje puts it in back cover blurb, commenting further on how "with roughness and humour and brag and tenderness" she "carries readers through rooms of passion and loss." (I quote him because, well, he puts it so well.) A series of poems on the death of her father carry a kind of momentum that reminded me of a page-turner novel, hard to put down. And yet... and yet. What I came away with was a series of remarkable reading experiences, but not a single memorable line. And no desire to re-read, not for a long while. (When I do re-read, I'm put off -- it's like reading yesterday's news.) I'm reminded of something journalist Carl M. Cannon said in a recent article in the Atlantic concerning ex-Pres. Bill Clinton (I happened to be reading this article around the same time):

"...it wasn’t easy to cover Bill Clinton. For a lot of reasons. For one, covering his speeches isn’t as simple as covering another president’s speeches because his quotes aren’t that good. He’s articulate, but he’s not eloquent and he reminds you of the difference between the two. I’d come back from an event and think, “Boy! That event was great! Clinton was great, the audience was great…” But then I’d look back to my notebook and realize, “Well, there’s not much there, not much usable.”

Will poetry critics eventually come up with a similar assessment of Sharon Olds? In poetry, the linguistic bar is much higher than in public discourse: there's no question Sharon Olds is eloquent, but is her level of eloquence, vis-a-vis the standards of poetry, the equivalent of mere articulateness in the political sphere?

This is one question concerning a number of "easy-reading" poets I'll be featuring here. Just what is "true eloquence" in poetry is open to debate, but I'd say it consists in unforgettable lines, lines so striking and fine that they dig immediate roots in the subconscious and are on people's lips for years (centuries) to come. I think of Marvell's "The grave is a fine and private place/but none, I think, do there embrace", Blake's "Tyger, tyger burning bright/in the forests of the night/what immortal hand or eye/dare frame thy fearful symmetry", Whitman's "I loafe and invite my soul/I lean and loafe at my ease, observing a spear of summer grass", Eliot's "Let us go now, you and I, when evening is spread out against the sky, like a patient etherised upon a table", Yeat's "What rough beast slouches toward Bethleham to be born?", even Irving Layton's "Your figure, love, curves itself into a man's memory." (Any faults here are mine: proof though is, I'm quoting from memory...)

I think, though, I'll get out of the way, and let the poet speak for herself, leaving you to decide. Here's one of my favourite poems of hers from the collection I just mentioned...

When I got to the airport I rushed up to the desk,
bought a ticket, ten minutes later
they told me the flight was cancelled, the doctors
had said my father would not live through the night
and the flight was cancelled. A young man
with a dark brown moustache told me
another airline had a nonstop
leaving in seven minutes. See that
elevator over there, well go
down to the first floor, make a right, you'll
see a yellow bus, get off at the
second Pan Am terminal, I
ran, I who have no sense of direction
raced exactly where he'd told me, a fish
slipping upstream deftly against
the flow of the river. I jumped off that bus with those
bags I had thrown everything into
in five minutes, and ran, the bags
wagged me from side to side as if
to prove I was under the claims of the material,
I ran up to a man with a flower on his breast,
I who always go to the end of the line, I said
Help me. He looked at my ticket, he said
Make a left and then a right, go up the moving stairs and then
run. I lumbered up the moving stairs,
at the top I saw the corridor,
and then I took a deep breath, I said
goodbye to my body, goodbye to comfort,
I used my legs and heart as if I would
gladly use them up for this,
to touch him again in this life. I ran, and the
bags banged against me, wheeled and coursed
in skewed orbits, I have seen pictures of
women running, their belongings tied
in scarves grasped in their fists, I blessed my
long legs he gave me, my strong
heart I abandoned to its own purpose,
I ran to Gate 17 and they were
just lifting the thick white
lozenge of the door to fit it into
the socket of the plane. Like the one who is not
too rich, I turned sideways and
slipped through the needle's eye, and then
I walked down the aisle toward my father. The jet
was full, and people's hair was shining, they were
smiling, the interior of the plane was filled with a
mist of gold endorphin light,
I wept as people weep when they enter heaven,
in massive relief. We lifted up
gently from one tip of the continent
and did not stop until we set down lightly on the
other edge, I walked into his room
and watched his chest rise slowly
and sink again, all night
I watched him breathe.

Posted by Brian Campbell at 4:13 pm

Sharon Olds's poetry is far more theme-dependent overall than quote/line-dependent. She also relies quite heavily on metaphorical 'special effects', like in her most famous (and probably best) poem, 'The One Girl at the Boys Party'--I always dug that one.

An interesting distinction. Maybe one could develop a course curriculum of "theme-dependent poets". I'll have to read (or re-read) that poem. Thanx.