Margaret Atwood at the Bleu 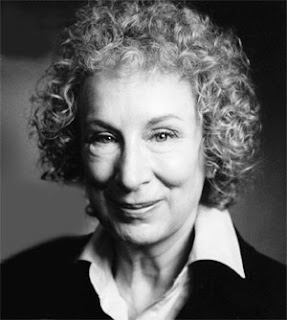 I just came back from Blue Metropolis (Metropolis Bleu) Festival, where I took in an interview of Margaret Atwood by Jian Ghomeshi, host of Q, a new daily arts show on CBC radio. It was a remarkably entertaining and insightful interview. Although I've heard tell of Atwood's caustic wit, it surprised me to discover just how quick-witted and downright funny she could be. (This woman really speaks her mind, and speaks it well - to have that liberty, she pointed out, it's a great advantage to have no boss or grants dependency to make you look over your shoulder.) After icebreaking trivialities that went on long enough that I started to wonder if they'd take over the interview, the discussion got suddenly serious when it veered towards Atwood's attitudes towards mortality, aging parents, and then, cultural politics. If I synopsise some of the things I found she put exceedingly well, I imagine they will sound banal -- i.e. how we are never really prepared for the shock of seeing our parents suddenly rendered helpless by aging, the role reversals that entails, & how the same goes for that final journey: how can we be prepared for what no one has come back to (convincingly) describe? So too with many other unknowns, including the subconscious we live with every day (and night). At the same time, she has always "loved to travel...", ha ha. For a taste of some of her political views, try out this entertaining and frightening article, published in the Globe and Mail three months ago, slamming the Harper governments' cutbacks to cultural promotion abroad, and to culture in general. Atwood still holds to those views, although they're criticised as harsh, feeling that -- although this government does its best to remain inscrutable -- its arts policies are quite knowing and deliberate. In this interview she likened the cutbacks to the NHL destroying its farm teams and thereby sabataging any future hopes of producing more Wayne Gretskys. She pointed out that if it hadn't been for the funding back in the 60s and 70s of little magazines and publishing houses like House of Anansi (which published her first books) and Coach House Press (with which Michael Ondaatje among others was closely associated), Canadian authors of international stature like herself probably wouldn't be where they are today. Probably the Harper government would wish that we fall back on a system of private foundations like we find south of the border, but we have none of America's advantages: no grand-scale corporate philanthropic tradition, which was, after all, begun by a class of robber-barons trying to clean up their tarnished public image. Wagering our cultural future is economically wrongheaded, she argued, considering that the Canadian arts and cultural industries bring in at least $40 billion a year, more than many major industries.

$40 billion a year -- it's hard to know how she (or her info. sources) arrived at that figure. Is it by defining the arts so generally as to include, say, sports, tourism and leisure? Then possibly a much larger figure could be generated -- but it would seem a specious argument, confounding much of that cultural-economic activity with, say, Canada Council fine arts funding and its spinoffs.

Even so, reflecting on the economic spin-offs of my own relatively modest cultural activities, it would be easy to see how one could arrive at a humongous figure, even if one limited the definition of culture to literature, film, music and the fine arts -- & if you included those spinoffs. Two weeks ago, I put on a musical event at a local cafe with three other musicians. We attracted, despite inclement weather, a crowd of about 50 people, who spent a total of about $900 on booze and food. Factor in the costs of transportation -- many took taxis, including the performers -- and we're at over a thousand dollars in spinoffs for the local economy just for that event. A poetry reading with 18 people benefited the cafe at least $200 (including a modest space rental of $40). There were photocopy bills for posters, & LCP handouts. Those 18 people probably spent about a hundred dollars to get there. Multiply that by all the events across the country, including advertising, hotel bills and airfares for festivals, + factor in expenditures on raw materials for cultural activities (photocopies, computers, art supplies, musical instruments & equipment, postage, etc.) + book & CD buying and I'm sure you're well into the billions. (The artists, as always, get a miniscule slice of that pie.)

Of course, regardless of dollar value, the arts -- as she pointed out -- are essential to being human, and cutbacks in that direction could be construed as an attempt to cut back our humanity. Anyway, all very thought-provoking and worthwhile.
Posted by Brian Campbell at 11:31 pm