Some pics of a two-day trip late last week to la belle ville. Click on them and they'll fill your computer screen. 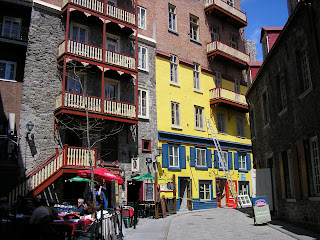 Restaurants in the old city... 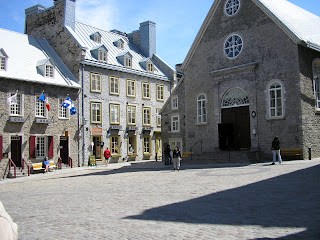 The oldest stone church in Canada (dates from the early 1620's). 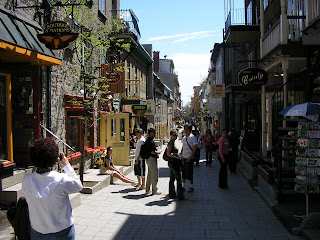 ... rue Petit Champlain, one of Canada's oldest streets (now given over almost entirely to glitzy tourist shops... no one in the picture, by the way, that I know..."just people", as we so errantly say. I hope none of them minds the possibility of being spotted by a boss or partner!) 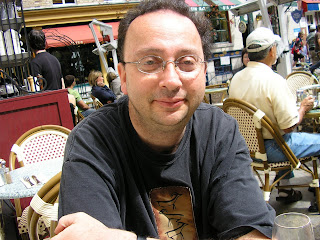 A picture of YT at one of the outdoor cafes in the Old City. Got some great pictures of my parter on this trip, but she doesn't like pictures of herself flying all over the world. So you have to settle for this rather drowsy-looking version of myself. 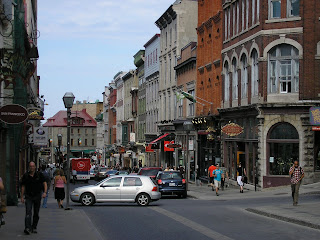 Rue St-Jean, a commercial street I prefer to stroll along to the picturesque but dolled-up streets within the walls of the old town. In a used bookstore here, I picked up a copy of Baudelaire's Petits Poëmes en prose (Le Spleen de Paris), which I had read already a few times in English translation... that night, in our hotel room, gained a valuable insight into B.'s creative process by looking over his lists of "poemes a faire" -- subjects to write on -- and "symboles et moralites", which were included in this fine edition. An obvious architectural shaping idea that it had never occured to me to do. Started my own list of "poemes a faire" for my own prose poems. And wrote a draft of one about looking through a window at night... 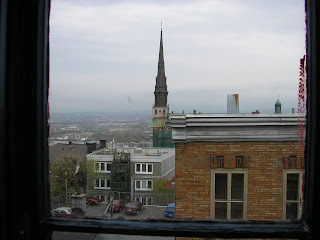 ... in particular this window, in our B&B hotel room in the old town. My favourite bronze statue in a town with a fair number of them. This outside a church on rue St-Jean which has been turned into public library.
Posted by Brian Campbell at 7:02 pm

Ah, thanks for these. Val and I were saying just last night it would be lovely to visit Quebec sometime.

Wow stunning - my partner and I have been dreaming up a trip to Canada this summer for a while, but couldn't decide exactly where - now there's no doubt we HAVE to visit Quebec City. Thanks,

There's also the extremely picturesque Charlevoix region (extending up to Tadoussac, famous for its whales)just a couple of hours up the road. If you want accommodation advice, feel free to write.