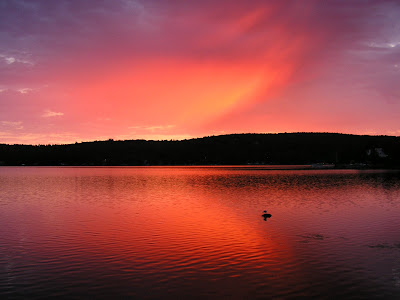 I happened to get up at about six last Thurs. morning, just before the sunrise, and caught this unusual glow in the sky. It looks like northern lights, but it did not shimmer or throb as northern lights are wont to do (not that I pretend to be an expert on northern lights, having only seen a few faint shimmers). I think it's the sun's rays filtering through some gauzy cloud or mist, although it's rather high in the sky for mist. "Red sky at morning, sailors take warning" -- & sure enough, there was a severe thunderstorm later that day. Maybe that's an explanation for any high-hanging mist. Click on these photos, and they'll fill your screen. 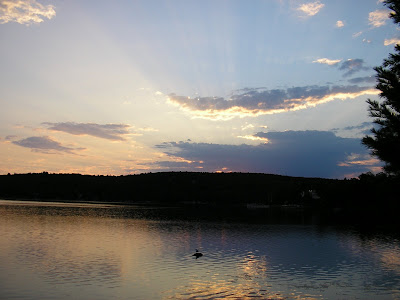 "The crack of dawn". That reddish glow, of course, had disappeared by this time. Below, another view, with the camera tipped vertically. This is of course is the kind of light favoured at the ends of sentimental movies, covers of Watchtower, and the like. Unfortunately, those tacky associations do take away from the sort of amazement I ought to feel. 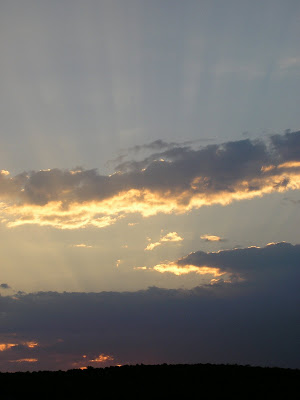 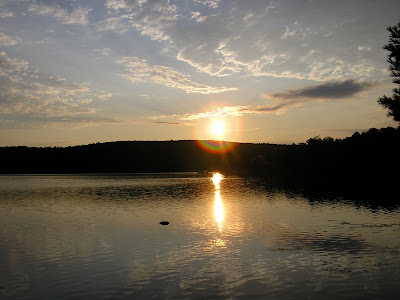 Well, here he is: Mr. Sol himself. Not so unusual a photo, that's for sure. Of course, it's my camera lens that has broken the sun's rays into a ringed spectrum. But that glow in the sky I captured quite accurately up above. It's not due to any trickery on my part (I'm incapable of that) or the camera's -- although perhaps my only witness is the little guy below, who sat perched on this rock and seemed to watch this whole spectacle with me. (Unless, of course, he was dozing. Quite likely. Dzzzzzzz.) 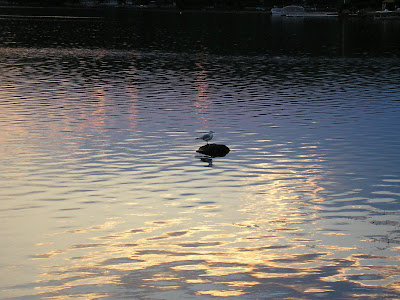 Why at sunrise or sunset does the sky glow orange or red? If you need an explanation or refresher on that question, here's a good site.

P.S. That Emil Nolde painting I chose seems to have been prophetic.
Posted by Brian Campbell at 10:15 pm

Aha! I found the photo. That's a gorgeous one, Brian. In my travel-sailing days, I was very aware of the sky as a predictor of weather. There's indeed an explanation for that old saying which I once knew, but can't bring it to mind right now. It does have to do with the changes in upcoming weather that the sun is refracting through.

Beautiful shots.
My mother and I spent our summers in Lac Connelly when I was quite young. We stayed at my mother's aunt's cottage. My father would commute from Montreal on the weekends. It is funny to have read your comment about people living there and commuting to the city. I remember the journey as very long with dipping and winding roads all the way.
There were fewer power boats then. I do recall waking often to the sounds of chainsaws however. There was space for the contemplative then.
Cheers,
Richard Binsley
Toronto

Thanks Richard. Did you see my posts on Aug. 23 and 19, 2007? More pictures and commentary about Lac Connelly.