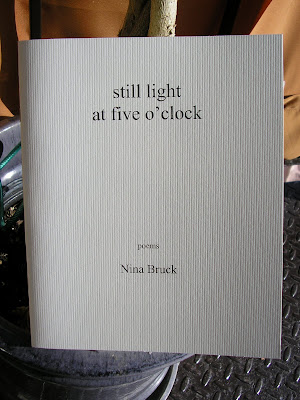 Here's the first chapbook off Sky of Ink Press (photographed outside, propped up on a flowerpot on my balcony -- at 5:00, to be precise, for obvious symbolic reasons & to take advantage of that beautiful waning afternoon light. Click through to see it large -- and caress that card stock with your eyes).

Clearly, its author prefers that her words speak for themselves. Be that as it may, I find it hard to resist tooting a few notes on her behalf.

Several things can be said about this remarkable woman. One is that she’s an extremely talented poet, possessed of a quick intelligence and the surest eye and ear. Even at their most tragic, her lyrics are leavened by a playful wit and warm, easygoing sensuality; many of her poems are pure fun. Here's another: she's written a lot of poems, quite enough to make up at least one or two excellent collections. Everything I've seen by her is good, and much of it, very good. Here's another: up to now, she has hardly published at all -- a handful of appearances in reviews and a League of Poets anthology; one poem was read out on CBC Morningside by Peter Gzowski. In 1992, on a whim, she entered some poems into Matrix Magazine's "New Voices from Quebec" Competition, and emerged with First Prize. She has submitted nothing since. And here's another thing: she was born in 1923. (Yes, she won that "New Voices" prize at the age of 70.)

I first met Nina Bruck at Susan Gillis's "Tiny Sea in the Ear" QWF poetry workshop back in 2004. It was a particularly good workshop, with a lot of capable writers around the table, so a number of us continued on afterwards, meeting on an informal basis about once a month for a couple of years. It always struck us as odd that Nina had never really published; indeed, once we grasped her depth of talent, it became deeply frustrating. Finally, my friend Raphael Bendahan and I prevailed upon her to produce at least a chapbook before she departs. By this point, we had clearly demonstrated how well we related to her work, and gained her trust as editors. So one fateful Saturday early last January, before any final qualms or "cold feet" could take over, Raphael and I stormed her apartment (on invitation of course), and with her fished out of her voluminous papers -- she had taken them out of her drawers and they covered her table, bureau, desk, in huge, disorganized stacks --twenty-one poems worthy of a fine chapbook and banged them into my laptop on the spot (before they flew away, so it felt). It took between 2:30 and 10 pm, with a break for supper. What fun! At that pace, we expected it to be out in a matter of weeks, but what with life's interventions, differences on how to order the poems, time required to refine a few lines, copy-editing corrections and re-corrections, all the usual (and some unusual) finicky details, it took the full nine months required to have a normal real baby. And now that it's finally out, it feels good to hold this little poem-being and flip once again through its contents.

To give you some taste of what I'm praising, here's a prose poem, the only one in the selection:

THE HEINTZMAN -- 1933
The day they repossessed my mother's baby grand I heard them leave, scaring the canary. The house forgot to breathe, then the fridge began, louder than ever. The walnut bench still stood, crammed with a thick Scarlatti in a yellow jacket and the sheet music from Rose Marie. I was supposed to be their own Yehudi Munuhin someday or failing that, to simply "play for your own comfort." Anyway there we were, the empty space filling the room. I knew they expected me to cry but I was mad, at the canary, its small bones, its timid knees, its inability to make a sound.


Some publishing details: Printed in an edition of 100 copies on high-quality cream-coloured paper with a cardstock light grey cover, Still Light at 5:00 is 25 pages long and contains 21 poems. The dimensions of the chapbook are, we think, typical of Sky of Ink Press productions to come: 8 1/2" by 7", that is, legal sized paper folded in half. Although this size can be inconvenient because of limited range and availability of quality paper stock, we like it because, compared to the typical folded 8.5x11 chapbook format, it leaves lots of room for a poem to breathe: longish lines aren't squeezed at the margins and there is no problem sticking to a decent-sized font.

Still Light at 5:00 is available for $10 Canadian or American including postage -- or an interesting trade. Just write to me via my website.

For more on Nina Bruck, click on the label below.
Posted by Brian Campbell at 5:10 pm

Hi Brian
Thanks for alerting me to this chap. Yes, I do remember you blogging aboot her now. I'd be interested in what you suggested via email if you can wait until I get more copies?

Hi Brian. very interesting piece about Nina Bruck. I would love to buy a copy of her chapbook. are you able to help, direct me? I Googled Sky of Ink Press & did not find it. p.s. I live in Comox, Vancouver Island. cheers, pat

with your address info, I'll send you the book. As I say above, it's $10, postage included.