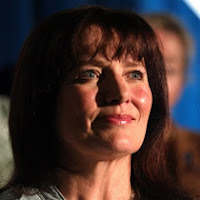 Tonight I went with my partner to hear Margaret Trudeau speak at the Queen Elizabeth Hotel. It was part of a conference on combating the stigma of mental illness. On the panel were other mental health advocates, two of them mental health professionals who themselves had gone through severe bipolar disorder or depression. Since my own partner is bipolar, this was a "must see" for both of us.

Ever since she went public with her belated diagnosis of bipolar disorder, Margaret Trudeau has been on a different sort of campaign trail, raising awareness at conferences of this sort all over the country. I had never been especially impressed with her before -- the media portrayed her as a total airhead and flake, and she provided the fodder -- but she surprised me with her engaging warmth, cogent intelligence, quick wit: besides her (still) striking good looks, I can now see how PET was quite struck with her in other ways. In an eloquent, humorous and at times impassioned speech, she spoke candidly about her life, her mistreatment at the Royal Vic (overmedication, wrong medication, medical negligence, i.e. few and improper blood tests) but also stressed that with current medications available, there was nothing shameful in being mentally ill; that the shameful thing was not accepting the diagnosis when it is obvious, and taking on the responsibility to face it and deal with it as best one can.

A number of mental health professionals were in the room, and some troubling themes revealed themselves during the presentations and question period, i.e.
Of course, there have been improvements over the years. Advocacy organizations for the mentally ill and their families -- such as AMI Quebec -- now provide mutual support and crucial aid for patients and family members in negotiating their way through the system. (These organizations did not exist but 20 or 30 years ago.) There has been more coverage in media and growing awareness and understanding in society. The fact that three of the mental health professionals on the panel were able to freely admit in public that they themselves had had serious mental health issues represents major progress: two or three decades ago, such an admission would have meant career suicide. But, the stigma still exists, and its effects are still obviously felt. One indication of the current state of affairs is that in 2007, we still need this type of forum; another is that given the pervasiveness of depression and other psychiatric disorders in society, shouldn't Mental Health Awareness Week be expanded to a month?

I never actually spoke up during the question period (there were lots of people there with prepared notes at the mike, ready to go), but if I had been better prepared I would have pointed out how there is lots of stigma embedded in the very terminology bandied about in this field. Diagnostic labeling and colloquial slights ("psycho", "loony bin") can be bad enough, but even the common use of the word "consumer" seems deprecatory. When I think of a "consumer", I think of some moron with a shopping cart, mindlessly "addicted" to his shopping. What does that make the mental health establishment? The "supermarket"? The tycoons? (The big pharmaceuticals certainly are.) Why not privilege those whom the system is supposed to serve and call them "clients"? Language, as poets and politicians well know, is powerful: sometimes reframing the terms can bring on changes in awareness, and open the door to better attitudes and better treatment.
Posted by Brian Campbell at 10:39 pm