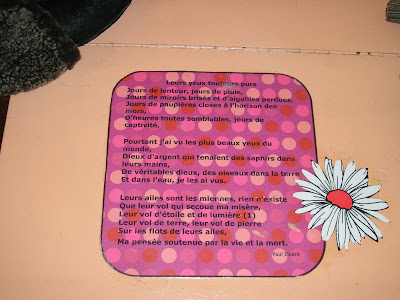 LEURS YEUX TOUJOURS PURS by Paul Éluard
(click through to see large)
I'll try my hand at translating the above:

For all that, I saw the most beautiful eyes in the world,
Silvery gods that held sapphires in their hands,
True gods, birds in earth and water,
I saw them.

Their eyes are your eyes, nothing exists
But their flight that shakes free my misery,
Their flight of star, of light
Of earth, of stone
On their floating wings
My thought sustained by life and death.

A remarkable poem -- and the translation (or "trans version"), not bad, if I may say so myself.

Some crits, though, of the original:

The poet/editor in me would ax the whole final stanza: it's all implied by the second stanza anyway, and the final line is a classic false tail, abstract, weak. The revelation is all contained in "I saw them". (Then I might have kept the title literal -- "Their eyes still pure". Some instinct in me -- my dramatic instinct, I suppose -- made me go with the more definite "Your Still Pure Eyes".)

There are, though, some good things in the final stanza's "leur vol d'étoile," etc., but if they are to be saved they should be reshaped to make them to make them revelatory in a conclusive way. Merely asserting that "only they exist...", and falling back on "my thought sustained by life and death" -- that's commentary, not revelation.

To my mind, "mes jours de captivité" (final line, first stanza) -- translated literally it would be "my days of captivity" -- is also weak, since again all he's doing is summarizing abstractly what's already suggested by the previous lines. So I went for the more physical "days barred shut" -- at least that adds something, some emotional/sensational punch.

French is a gentle (should I say gentille?), whispery kind of language, and seems to sustain abstract nouns and adjectives more felicitously in its rhythms and passions than English. French poets, in my limited experience, embrace abstraction far more frequently than do Spanish or English poets, but it often translates tritely and seems rather ineffectual even in the original, to my mind. That's why, quite frankly, I'm no great fan of French poetry. Only two poets I've encountered really do it for me: Baudelaire and Rimbaud. May I be introduced to others.
Posted by Brian Campbell at 12:18 pm