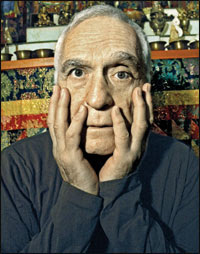 Tonight I was strongly considering heading down to the Sala Rossa to see spoken word pioneer John Giorno perform. Montreal's Hour gave him its supreme hype -- last week's cover and a full page spread -- proclaiming him a "literary icon" with a "star-studded legendary life", "internationally acclaimed", "one of the last living sons of the Beat Generation."

This kind of attention, of course, is rare for a poet.

And yes, from the interview and photos you can tell Giorno's a charismatic dude with interesting stories to tell, and at 72, he's unlikely to swing through these parts again.

But a telling thing is, not a line of his poetry was quoted in the article.

And because of tonight's weather -- a particularly nasty combination of blowing snow and sleet -- I balked further about hoofing 2 km. down the road and shelling out $12 to see him. Is this guy really worth it? (You see, like so many "legends", I had never actually heard of him until he pulled into town.)

So I decided to look him up on the net. And sure enough, his poetry is crap. You need only to read this to see how he strings together dead metaphors, hackneyed slogans and cliches. For a guy who hung with the likes of Ginsberg, Kerouac, and Burroughs, he didn't learn a lot -- about the art of writing, at least.

His Youtube performance is considerably more compelling, but like much of what goes under the rubric spoken word, it rings hollow because it consists of bad writing grandstanded into something, well, pseudo-compelling.

To his credit, Giorno founded Giorno Poetry Systems, releasing over 40 LP's of Allen Ginsberg, William Burroughs, Ted Berrigan, Frank O'Hara, Aram Saroyan, and others. In 1968 he also created Dial-A-Poem, a wildly successful poetry promotion and an interesting concept even today. Besides being the subject of a couple of Andy Warhol's more controversial films, Giorno's greatest legacy may be as an energetic enabler and presenter of other writers.

Whatever Giorno is himself as a writer, there's got to be lot of genuine love behind that kind of effort. Besides, of course, the requisite dose of ego.

In the meantime, I'm going to thumb my nose at the weather, lie back and read Sylvia Plath's The Belljar. Now, that woman's prose absolutely crackles. (Her poetry, of course, deserves all the superlatives it's been given.) I'm also going to dip into Charles Simic's Selected and Bob Hicok's This Clumsy Living, which arrived today in the mail.
Posted by Brian Campbell at 9:06 pm

"What I did 40 or 50 years ago was reject lyrical poetry..." - he says in his interview to the Mirror. Well, that says it all really. I think we've moved on from that, haven't we?

The rejection, or lyrical poetry?

My guess is he's thinking of Tennyson, Browning, Dickenson, probably Roethke, Hecht, etc. But still, cliches are cliches, dull writing is dull writing, and no amount of grandstanding will make up for that!

One thing about John Giorno that I've always related to was his stealing from pop art, of which I've done a fair bit over the years. His romantic relations with Andy Warhol resulted in him adapting the repeat image to poetry--that's where all those repeating lines come from. I really dug that piece he recites in Ron Mann's 1982 documentary film Poetry In Motion; the one with the stuff about, "We got here yesterday, we're here now, and I can't wait to leave tomorrow." I remember him doing a piece for Much Music in the early '90s, when they were inviting people to leave their poetry courtesy of bloody Speaker's Corner. Henry Rollins also left some stuff for that series.

Actually it turns out the Youtube performance I linked to is that piece from the Ron Mann film.

Thanks for the enlightening contextualization. The repeating lines are neat in performance, and maybe I was harsh on the guy. The words still don't stand on the page; but maybe it's unfair to judge them that way. Kind of like taking song lyrics and examining them as print poetry.

Nevertheless, I'm still glad I thumbed my nose at the weather, stayed in and got some good reading done.

... I should add, though, that in the Hour interview Giorno invites critical scrutiny on literary grounds by lumping in what he does with what poets of earlier times did, specifically, Charles Baudelaire.

Actually, before I came across this post of yours, I thought Giorno died about ten years ago!