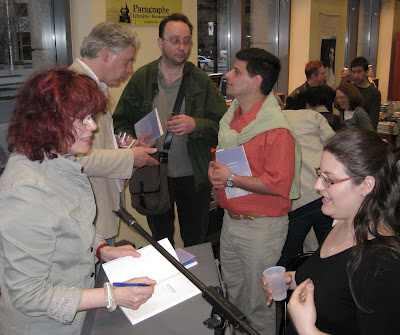 The picture above taken at last Thursday's launch of Maxianne Berger's new book, Dismantled Secrets. There's Maxianne signing a book for Elizabeth Robert (right), poet, translator and host of the Montreal reading series Noches de Poesia. Also in the picture are, above from left to right, my friend Jean-Pierre Pelletier, a poet and translator into French; yours truly; and Jonathan Kaplansky, another literary translator of my acquaintance who has translated, among others, Helene Dorion into English. The reading at Montreal's Paragraphe bookstore was about as packed as that tight little corner of the bookstore could be: in all about 45 people attended, with plenty standing between the narrow rows of shelves; I'd say at least 20 or 30 books were sold.

Maxianne's poems are at turns poignant and playful, and her readings always well-paced and engaging; she deserves her loyal following. She does a lot of work in forms -- haiku, tanka, palindrome, abcdarian, to name a few -- but even the most sombre of her free-verse poems sparkle with a particularly winning word-sense and word-play. Enough, though, for blurb-talk: to illustrate what I mean, here is, as she put it, the title poem whose title is not the book title. It's reproduced here with her permission and that of her publisher.


ADVICE TO ONE BURSTING WITH A SECRET THAT MUSTN'T BE TOLD

Arrange a bowl of ripe peaches on your kitchen table.
Tell your secret to each one. Your secret is safe
for the silent peach is virtuous, both heart and tongue.

Take a walk in the woods, far from your home.
Find a tree with a knothole too small for a bird
and whisper your secret, then fill it with mud.

Tell the grass grown wild on your front lawn.
Take out your mower and mow each blade down
before the wind gets wind of the words and blows.

Take a hot shower. That jasmine-scented soap? Let it
be your confidant. Lather your skin with the words
then rinse, and watch them sputter down the drain.

Tell the rain. Tell the rain that falls on the city streets.
The raindrops might well tell the sidewalks but
the gist will get lost in the splatter and splash.

Tell one who is mad - your deranged cousin - whose
sharp gestures punctuate discordant verbal fugues.
The mad one will tell all, but none will believe a word.

Tell a poet, for a poet dismantles secrets, hides the pieces
in schemes and tropes. What you want no one to hear,
the poet will surely reveal, but none will believe a word.


from Dismantled Secrets by Maxianne Berger, Wolsak and Wynn, 2008
Posted by Brian Campbell at 9:26 pm

Brian, thanks for alerting me to this poem. She's indeed wonderful. I like this poem very much. As a onus it was nice to see a photo of her, as well as you.

I'm still typing with erasers but can do a bit more now so I'll be around more often. I do have a couple of new poems posted, despite the erasers.

'onus' is 'bonus':-) (darn if I didn't hit a wrong key on my first correction attempt...it's early. Not even dawn yet)

Maxianne Berger is quite talented. I'm familiar with her mainly as a haiku poet, but, yeah, she's all-around good. In other words, the CBC's National news won't be doing any Friday-night documentary features on her anytime soon....