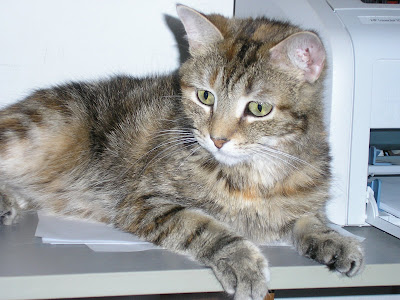 Poetry month has come and gone. While some may characterize it as having all the appeal of a charity drive, I think it's a good thing, coinciding as it does with Spring, going out to readings, renewed vitality in all ways. For me, though, all intentions of NaPoWriMo-style creativity or prolific reviewing of others' poetic efforts were swamped by a lot of supply teaching, a sick computer that needed six trips to the repair shop and a sick cat that needed four trips to the vet. (Over the winter Misha, our tiny, beloved torby pictured above, developed severe gingivitis and had to have almost all her back teeth out... I'm glad to say she is doing much better, is much more energetic and sociable, although she'll have to eat soft food for the rest of her life, an inconvenience more for us than for her.)
-------------------------------------------------------- 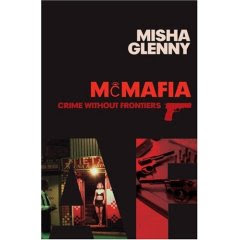 Today at Montreal's largest literary festival, the Blue Metropolis, I saw a lecture by one Misha Glenny, who has recently come out with McMafia, a detailed expose of international crime. The fact that this man was the namesake of our cat was, absurdly enough, a factor behind our choice to attend this particular lecture. (Let's see what our cat has to say about world affairs, I said to my partner with a laugh.) The subject matter, though, was compelling.

The main gist of the man's thesis is that the collapse of communism together with the the forces of globalisation have lead to the rise of international crime -- drug trafficking, human trafficking, human organs trafficking, arms smuggling, money-laundering, all sorts of contraband -- on an unprecedented scale. Indeed, the size of this "shadow economy" now stands, by his calculations based on authoritative sources, at 15-20% of the world GDP. It's behind all kinds of nasty phenomena of our time, from a Taliban armed to the teeth through opium sales to blood diamonds and blood coltan to the obscene opulence of Dubai. A spotlight on Bulgaria, a country with which Glenny is particularly familiar, provides insight into the dynamics behind these developments. There, after communism fell, several thousand secret service and security personnel were sacked. Armed, experienced in espionage and trained to kill, these are not exactly types you would want footloose and fending for themselves in a desperate economy. These -- along with, incongruously, a number of Olympic athletes, particularly weightlifters, who had lost their positions of privilege in the old regime -- became the henchmen, and in some cases the leaders, of the new oligarchy. Ibid, with some variations, in the former Soviet Union.

It's the very truth, your cat seems very inteligent. She knows many things. By the way Misha is very cute, even more than a baby seal, well may be I'm wrong here...
Nice book thaugh, it forced several millions to immigrate too, some kills, and the distruction of a very good education system (primary and secondary schools) where everybody wants to be a gangster !