Bringing Summer to the Rock 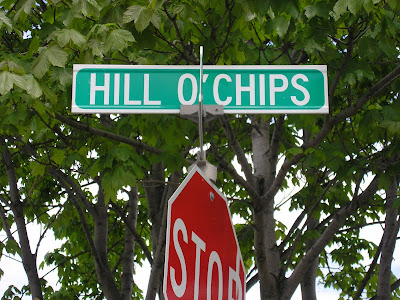 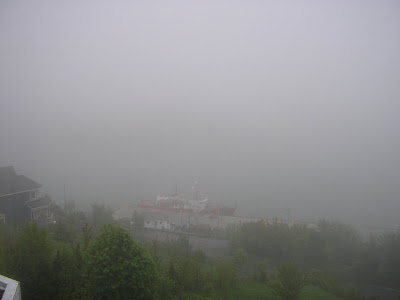 Morning fog in St. John's harbour;
above, street sign for Hill O'Chips, taken on a clearer day
(click thru to see large)

Shortly after I arrived at the Battery Hotel in St. John's, I was asked to be interviewed by host Jeff Gilhooly on the CBC St. John's Morning Show. It was to be about League Conference, but there was also a special request: since the weather had been so miserable of late (fog, rain, highs of 10 degrees C.), could I volunteer some poetic lines about bringing summer to St. John's?

Actually, they had originally asked Maurice Mierau, League President, to do the interview, but he wasn't sure he'd be up for it (he would be flying in after midnight and had to chair meetings all day) and recommended me instead.

I gladly accepted the offer, but with some trepidation: what would I dream up over the next few hours about that? The subject seemed rife with trite possibilities. I was reminded of the demands by certain Persian potentates of their court poets to come up with some suitable lines for an occasion, or off with their heads. I went to a reading at Breakwater Books that began our fest with some vague notions flying around in my mind of laying down of sacramental flowers, of everyone having a summer inside them and those flowers within them, something like that.

At the reading, I was exposed to some of The Rock's better poets -- Tom Dawe and Mary Dalton were standouts, expressing par excellence that Newfoundland verbal flair everyone remarks upon who comes here. Coming back, the fog was so thick you could cut it with a knife -- thicker than any I had ever seen: you couldn't see much past 20 feet down the road. I enjoyed the streetnames -- maritime names like Topsail and Water, dumpy Anglo names like Duckworth and Gower, oddities like Quidi Vidi, quaint & Victorian like Temperance, and then, oddest of all, at the crest of a hill overlooking the harbour, Hill O'Chips... back in my hotel room, a look at the map revealed all kinds of fantastic names for the fishing villages (many abandoned) along the rugged coasts. Indeed, the rooms at the Battery were named after them. My own was Indian Tickle, across the hall was Happy Adventure; also there was Shambler's Cove, Nameless Point, Heart's Delight, Nipper's Harbour, Nicky's Nose Cove, Witless Bay...

Fortunately, a student of mine who happens to subscribe to Canadian Geographic had passed to me its most recent issue; in it was an article on Newfoundland expressions. What a rich vernacular! Among them were these two which I ended up using (obscure, it turns out, even to most Newfoundlanders, but there they were):

A noggin to scrape: a difficult task.
All dressed up with scurvy ankles: she's well dressed by not clean.

By 3 in the morning, this is what I came up with. It was fun reading it over the radio 4 hours later. (Needless to say, I had to sleep through most of the following afternoon...)

BRINGING SUMMER TO THE ROCK

The fog’s clammy snout
wets my cheek, brushes my brow
as I gaze down from the crest of Hill O’Chips
into this dour harbour --
bringing summer here is a noggin to scrape,
I’m all dressed up with scurvy ankles but I’ll try:
hyacinths, bramble rose
even that fistful of dandelions
I gave my first grade teacher
two score years ago or more as a bouquet
I lay, in this place that gives tongue
to the outcrops,
Happy Adventure, Indian Tickle, Witless Bay --
whimsical wordsprouts that
bloom for us all
their own feverish summer.

Email ThisBlogThis!Share to TwitterShare to FacebookShare to Pinterest
Labels: BC Poems, League of Canadian Poets, Newfoundland

I guess it's always like that in life.....sometimes you have the right thing on the right moment, sometimes not.....So I'm really pleased I helped you....and honestly you deserve it very very much.

Sometimes I believe it was already chosen or written or whatever you want it to be,.....but the president was late....he has chosen you and....you just get some ideas from Canadian geographic.....you see it's like on of your poems......just well done at the right moment. The credit is ALL YOURS, because you are the one changing things, I just played a little role like Gandalf, but you've done it and it's beautiful.....as all Canada is.....Qc, Ont, B.C. and etc....

Thank you for your classes.

YOU ARE THE MAN TO HEAR AND LISTEN, not Gandalf ;)

Almost a year later and Hill O'Chips is still dangling in the St. John's air. Wish you were all coming back, bringing poetry to the Rock. Cheers from here, Marian White