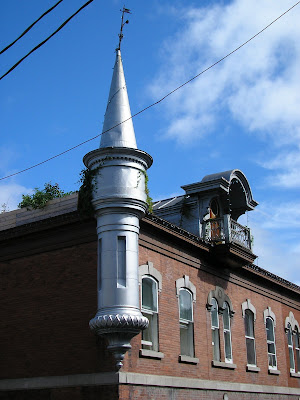 Just got back from Quebec City, where we hung out for a couple of days, eating out, walking around the old town, shopping, reading in cafes. I took along for reading Jhumpa Lahiri's The

Namesake (highly recommended -- a brilliant book), and my bilingual edition of Baudelaire's The Flowers of Evil -- magnificent not only for Baudelaire's poetry, but for the superb translations by the likes of Richard Wilbur, Robert Lowell, Roy Campbell and others. For me, for almost entirely personal reasons, Baudelaire and this town are intimately connected: in its antique elegance and inanity, it could well be the closest approximation I can get in this corner of the world to my idea of his mid-19th C. Paris; also, during last year's stay I wrote a palimpsest of one of his prose poems. (For more pictures of Quebec City, click on the label below.)

This year is the 400th anniversary of the founding of this town: there were lots of events and hoopla. That was really not why we went, but we did take in Le Moulin à images. I had heard some rave reviews (or at least rave mentions) by acquaintances and the media, so it seemed like a must-see.

Le Moulin à images (The Image Mill) is a forty-minute (well, according to my watch, 50 minute) audiovisual production projected against the grain silos in the Port of Québec, created by the renowned animation group Ex Machina under the direction of no less a mover and shaker than Robert Lepage. The idea, according to the website, was to create an "impressionistic portrait of the city over time" -- a kind of visual symphony in four movements corresponding to the city's four centuries of history. The production is huge-- the largest outdoor architectural projection ever created, some 600 meters long by 30 meters high, with 27 synchronized video projectors, 230 spotlights and more than 300 loudspeakers. Some of the tableaus are quite stunning, as you can see: 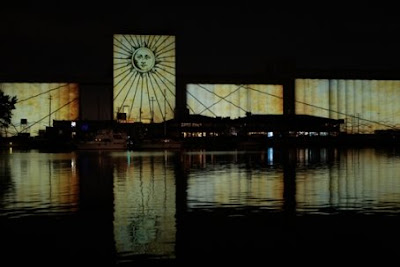 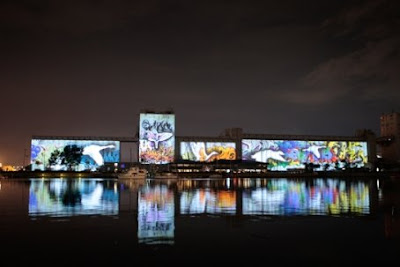 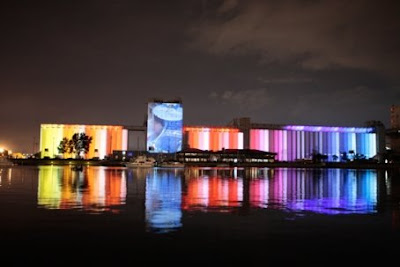 The production, as could be expected, was done with plenty of panache. The cylindrical shape of the silos was frequently put to cunning use; one of my favourite series of tableaus represents the visual arts, including a celebration Sico Paints, a major paint company founded in Quebec City -- assembly lines of paint cans dissolving into the spectrum of brilliant colour seen above. (Was Sico one of the sponsors? En tout cas...) One of the most powerful moments was when decline of Catholicism was represented by the shattering of stained glass images all over the screen.

The focus was primarily socio-economic-technological; conspicuously absent was any treatment of politics, particularly during the last 40 years. For some reason, Lepage et al decided to zero in on the Queen's visit in the '50s, with a video panning a small crowd placard-carrying protesters -- hardly the most significant political event in the capitol of Canada's (near)breakaway province. What of the PQ, Rene Levesque, School/Language reform, etc? Was the nationalist legacy considered too hot to handle? Yet it seems to me that reality could have been dealt with briefly and intelligently within this enormous visual collage without necessarily pouring gasoline on separatist flames. Anyway, from Robert Lepage I expected something far more daring. For all the size and technical mastery of the production, after thirty minutes I found myself looking at my watch to estimate how much time was left; and I was not alone. As a couple beside me said when the lights dimmed on the fake fireworks finale: “C’etait beau, quand même.”
Posted by Brian Campbell at 10:20 pm