MONEY... and a modest proposal 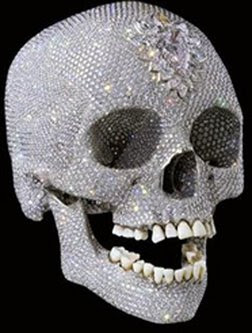 Just read today in the french Montreal entertainment review, ICI, that the Conservative government cuts to our already meagre arts funding -- $45 million -- amount to a mere 70 cents per Canadian, per year. As the article points out, most of us lose that much between the cracks in our sofa cushions.* Hardly a victory in a war against waste. And yet the implications for arts... well, I need not go on.

Meanwhile, close to three-quarters of a trillion dollars south of the border are being ploughed into AIG and other failing financial institutions to bail them out from their own colossal mismanagement and malfeasance.

Not to mention billions upon billions in US federal reserve graft that "disappears", trillions wasted on the military, etc.

Doubtless we have our own counterpart to that profligacy, hidden like an iceberg beneath our icy waters.

Meanwhile, in Southeby's last week, British artist Damien Hirst shattered all records by auctioning off more than 200 pieces for a cool $200 million.

Hirst specializes in animal carcases pickled and elegantly displayed in cases of of formadehyde. One piece, a bull calf with a golden disc on its head and golden hooves, fetched $60 million. Golden calf, indeed. Actually his work is brilliantly provocative, diverse, and at times beautiful as it is macabre. Consider his diamond-encrusted skull above, which sold last year for $98 million. Whatever one thinks of his art, one can't deny how deftly and ingeniously he plays with symbols of death, status, old-time religion, opulence ...just the things that appeal to the upper echelons of today's power elite. Decadent art, if you will -- with a firm emphasis on the etymological root, decay.

Hirst, who employs a factory of dozens of assistants, is our present-day Warhol. If anything, Warhol pales by comparison. (He was already pale...)

Better, I suppose, that all that booty go to an artist than some hockey player. Or some mogul in Dubai. (I don't doubt some of it is from moguls in Dubai.)

Maybe we Canadian artists who complain so much about our government should offer ourselves up for Hirst's next formaldehyde collection. I'm sure we would fetch a good price. Then we wouldn't have to depend on Harper's subsidies at all!

*Actually their math is quite off. According to Stats can estimates, Canada's population as of this writing is 33, 380,162 -- which would put the value of the cuts at roughly $1.35 each. Still seat cushion money, more or less. Arts types are not always known for getting their figures right.
Posted by Brian Campbell at 9:39 am

Yes, we're in trouble all over and letting go of the wrong things in our national budgets.

To me there's something very off about an artist who runs art like an industry, but it's been done before and will again because, as you say, the rich buy it. What do you say? If you stumble across a million bucks, want a nice formaldahyded cow butt with a golden bracelet on its tail for your living room??:-)

... probably would be better in the dining room. And with a million bucks, I might be able to put a down payment on the anus.

Interesting to bear in mind, but both Rodin and Michelangelo where cultural industries in their time. But may I hazard to say, they were better artists? (Or has cultural relativism gone this far?) In any case, I think they'll prove to be more lasting investments (the criterion that *counts* above all else :-0)