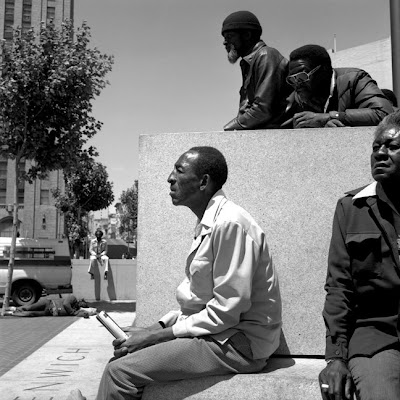 "The Tribe" by Raphael Bendahan
A pleasant surprise from Raphael Bendahan, my poet-friend and co-editor at Sky of Ink Press. He just won the the second Grand Prize in the Focal Press' monthly photography contest, for the photo above. (The announcement will be on their website shortly.) I love the mood of pensive resignation in this shot. The men poised against that granite look almost sculptural. As perfectly composed as a painting by Goya or Delacroix, "monumental" is another word that comes to mind. (Well, it is taken at the base of a sort of monument.) The award: a fancy new Nikon D60 digital SLR camera, a value of about a thousand dollars. Nice work, Raphael! He took this shot nearly three decades ago in I think it's LA. (or is it NYC?) -- and submitted it without expectations. Indeed, he finds this magazine rather straight for his tastes. (Just look at the other selections.) Also a maker of short films and sometime photographer, Raphael was telling me he feels especially blessed by this award because it so happens he was in the market for a new camera at this time. It's been a good year for him: his short film, A Spanish Tale, was short-listed in RCI's Migrations competition, and shown at the Montreal World Film Festival this year.
Posted by Brian Campbell at 12:15 am

You were right. Awesome is the word. Photography has been my hobby since my early twenties and this is a fantastic photograph.