This week I decided to take a little holiday from screen-based activities. I also had a good deal of extra teaching, including two seven-hour days on a split shift (morning, evening) that involved a lot of stressful driving through snow storms. When spare time has allowed, I've been reading delicious prose: Anne Marie MacDonald's Fall Down On Your Knees, a haunting, beautifully written Canadian masterpiece about incest and the stories woven through three generations to both cover up the trauma and, unconsciously, deal with it; and now, Barack Obama's The Audacity of Hope. 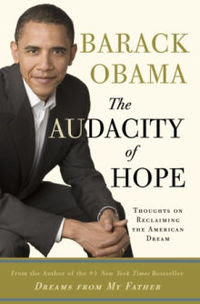 Judging from this book, Americans can rest assured, I think, that they've elected a man of solid, well-thought-out values and integrity: while he has shown perhaps too much willingness in his appointments and tax breaks to bend towards the thoroughly discredited Right, much of what he said in his inauguration speech about making tough and responsible choices could have been lifted from this text published in 2006, when the current financial debacle was but an uncertain cloud on the horizon. In his first days of office he has been following through commitments outlined here on closing Guantanamo Bay, reasserting habeas corpus rights, labour rights, environmental legislation, etc. I especially like his candid discussion of the kinds of pressures that lead a politician down the all-too-easy path of two-faced manipulation: Obama may well prove to be the most conscious as well as conscientious Presidents in living memory. I highly recommend this book, if you want to get a stronger sense of what's coming. What a relief, after Bush! And so far, in these first days -- a somewhat guarded Bravo.

Now, a backlog of e-mails to attend to.
Posted by Brian Campbell at 11:10 am

Do you remember my first comments about his election ?
And do you remember what I've told you......
I guess, you need to have a book to believe it ;).

Kidding you....I still admire your sources of information and the articles, books, etc. that you share.
Thank you.
Svilen