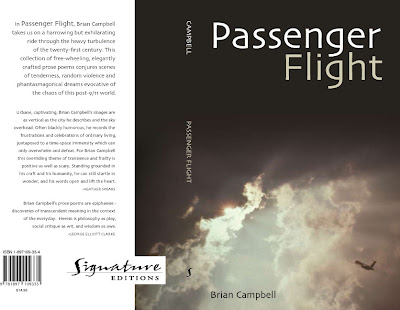 Here it is, in its final form. After back and forth emails featuring proposals and rejections of much uglier alternative fonts -- an exchange that I saw could go on forever -- I decided for simplicity's sake to stick with the original font, which is, after all, quite attractive.

Here's the text on the back cover:

In Passenger Flight, Brian Campbell takes us on a harrowing but exhilarating ride through the heavy turbulence of the twenty-first century. This collection of free-wheeling, elegantly crafted prose poems conjures scenes of tenderness, random violence and phantasmagorical dreams evocative of the chaos of this post-911 world.

Urbane, captivating, Brian Campbell’s images are as vertical as the city he describes and the sky overhead. Often blackly humorous, he records the frustrations and celebrations of ordinary living, juxtaposed to a time-space immensity which can only overwhelm and defeat. For Brian Campbell this overriding theme of transience and frailty is positive as well as scary. Standing grounded in his craft and his humanity, he can still startle in wonder, and his words open and lift the heart. —Heather Spears

Brian Campbell’s prose poems are epiphanies – discoveries of transcendent meaning in the context of the everyday. Herein is philosophy as play, social critique as wit, and wisdom as awe. —George Elliott Clarke

It was quite an honour to get such ringing and eloquent endorsements from such fine writers. I mean, it quite blows me away. (More about that whole sticky matter of blurb endorsements later.) Editing was done as of last Monday. The next step is out of my hands.... I can only keep my fingers crossed that the book will arrive at my doorstep before the launch on April 19...
Posted by Brian Campbell at 1:44 am