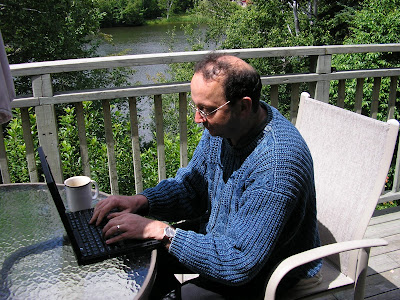 Back in town -- was away for a writing week at a cottage near St-Adele, Quebec, the same one Jocelyne and I rented last year (more pictures here). It was a great retreat -- although for the most part the weather was awful. Out of seven days, we had two sunny ones (but still cool, as my sweater attests), and the rest of the time it was gloomy, raining, and cold -- too cold to use the sun deck or swim in the lake. A couple of nights it went down to the single digits (C., that is). We had to use the wood stove (which was fun -- like almost anyone, I love watching fires) and wrap ourselves in warm blankets. Still, I got some good writing done -- four poems, two among my best, methinks -- and lots of reading, including Orhan Pamuk's Snow, Sherwin Nuland's The Art of Aging (my god, how I'm thinning up there! Maybe that's the occasion) and poetry by Fiona Tinwei Lam and Jack Gilbert and a number of podcasts from Poetry magazine (more about those later). J. meanwhile did a couple of good short poems and two paintings. We punctuated our solitude with visits from friends. Among them was my friend Raphael Bendahan: we spent a day selecting and editing poems for the next Sky of Ink production, his chapbook, whose working title is By All Accounts.

The cottage is a great place to focus, and a tremendous relief from our own clutter and the city noise, but weather-wise, we have not had luck. Last year, too, it also rained almost every day, and we've had dominant bad weather in previous years. A couple of friends have bought a cottage near La Chute and invited us to stay for free. I think next year we'll be doing just that -- and waiting for a decent forecast before setting out. 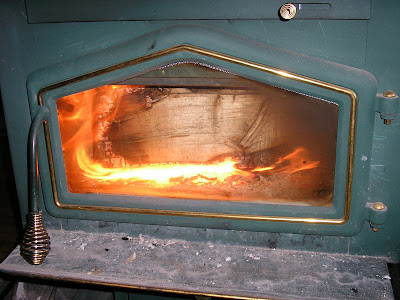 Posted by Brian Campbell at 5:44 pm

Email ThisBlogThis!Share to TwitterShare to FacebookShare to Pinterest
Labels: BC personal, BC pics