Passenger Flight gets its first review

The premiere review of Passenger Flight is up at The Rover. It pleases me to say it's a most eloquent, perceptive, and generally speaking, positive review by Roger Sauls, a poet who writes out of Chapel Hill, North Carolina. He begins the review with as profound a reflection on the tensions within the prose poem form as I've come across.

The long and short of the prose poem is that it’s a product of deep inner contradictions. Its prose wants the freedom to wander, while its poetry wants the brevity of a few luminous words. It rejects the primacy of either of its parents in favor of a synthesis of both. It delights in frustrating the expectations of the readers of poetry and the readers of prose. In the end, its perfect realization is a construct of awkward grace that conceals as much as it reveals, that darkens the blank page with justified lines that are jagged with revelations.

I must admit, on first reading, I was rather taken aback by the generality, about three-quarters of the way down,

There is no difference, to him, between the sacred and the profane. Everything is slightly absurd, everything has its own lurid charm.

Everything? Hmmm. And the "no difference" bit makes me sound positively amoral -- although an emphatic moral stance is expressed in a number of the poems, including, for example, Fix. But, on further examination, it becomes clear that Sauls is talking strictly aesthetic strategies -- tone, word choice, juxtapositions -- and not morality per se. It would seem this reviewer's aesthetic conservatism causes him be somewhat uneasy in his appreciation of the deliberate contrasts in my work, and may even limit him in understanding the content of certain poems (at least, that seems to be true of "Gallimaufry", a playful satire on the ultimately self-referential writing-about-writing of the so-called Language school, and a poem which pretty much explains its own modus operandi if one reads on: "Dandelions, crabgrass, creepers: I've left them in, planted them deliberately".) Be that as it might, one can hardly be expected to address all nuances within the five-hundred-or-so word limit of a Rover review. Having written such reviews myself, I well appreciate the challenge, which Sauls rises to in superb fashion. Indeed, I'd be interested in seeing his poetry.

I find it clairvoyant, by the way, that Sauls refers to Munch in relation to "Brainpan". This very image flashed in my mind as I wrote that poem: 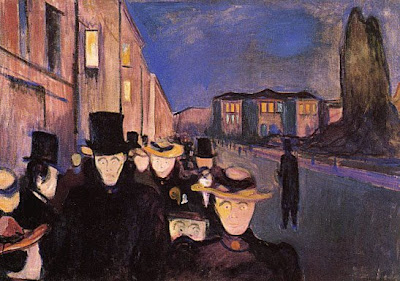 Well, as you can see,you are kind of famous, not even on the hockey ground.