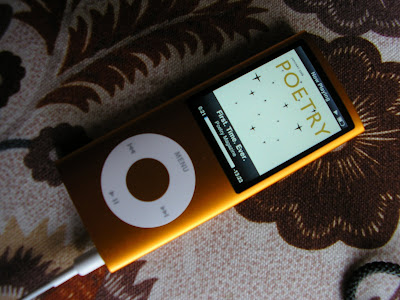 One reason I have been blogging sporadically of late is that I bought an iPod Nano, and have been attuning myself to the universe of Itunes. My computer, for some mysterious reason, stopped recognizing my three-year-old but sadly outmoded Sandisk. I was glad to do the upgrade, however – my Nano, pictured above, is a nifty little thing.

One discovery I’ve made: the monthly podcasts of Poetry Magazine. They’re free to download, and hugely enjoyable. In fact, I’ve downloaded them all. The two editors of the magazine, Christian Wiman and Don Share, air authors’ readings of chosen selections from the coming issue, then discuss why they liked them. The discussions are insightful, neither stuffy nor self-important at all. These relatively youthful editors (30’s? Early 40’s?) unabashedly love what they do and the selections, I’d say, are often damned good. I feel, believe it or not, that every time I listen in I’m encountering kindred spirits. Makes me consider submitting to them again.

Despite the self-professed open-door policy, I continue to get the impression that particularly if you’re from outside the US, your chances are pretty close to nil of getting into their pages unless you’ve acquired considerable renown. But these fellows enthuse enough about newcomers and the previously unpublished (all American, so far in my listening) to raise hopes. Another discovery: it’s not necessary to subscribe to the magazine to read the poems they discuss. The entire contents of each issue are archived on line. (For a while, I thought this was a promo sampler, to get you to subscribe. Nice to have such a budgetary carte blanche...)
Posted by Brian Campbell at 1:19 am

Thanks for this. With the internet as vast and open source as it is, it's still surprising to find such quality for free anywhere.

And yes, I'll keep my fingers crossed that I be that next poet they are reviewing. :P

This is WONDERFUL! Thanks for sharing!