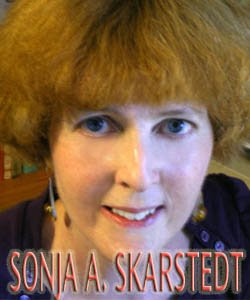 I just learned from Stephen Morrissey that Sonja Skarstedt passed away after a long battle with cancer last Friday. She was only 48. Montreal poet, painter, editor, reviewer, playwright and recently filmmaker, she founded and edited Zymergy magazine, which ran between 1987-90, and Empyreal Press, which produced a number of Montreal authors, including Louis Dudek. For a heartfelt in memoriam by a writer who knew her personally, see this post by Stephen Morrissey. For more about her various fine productions, see www.skarwood.com
Posted by Brian Campbell at 12:47 pm

Email ThisBlogThis!Share to TwitterShare to FacebookShare to Pinterest
Labels: Passings

That is too bad. Here in Kentucky, we recently lost two esteemed figures in poetry and literature. It has been a hard time on the literary world, as of late.

But a good poet (that is, a poet who is a good person) has much to leave behind to remember them by; in their legacy as well as their physical works.

I'm sure she will be remembered.