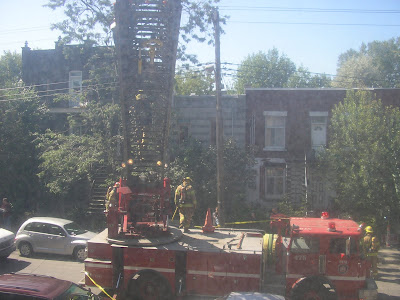 This is what I saw out my window last week. I was typing away -- writing another review for the MRB, in fact -- when suddenly two fire trucks roll up, sirens dying, right in front of my house. Then the truck above raised its ladder -- for a moment it seemed it was going straight into my window. Eventually it went up onto my roof. If you look closely (click thru to see large), you can see a fireman scrambling up. This is the shot I took before I evacuated.

It seems a fire started in a neighbours' kitchen two doors down, caused by an electrical repair that went very wrong, making flames go up the insides of the walls. Eventually ten fire trucks were parked on my street. The fire dept. soon contained the fire; the back ends of the two apartments affected, though, were completely burned out. Luckily no one was hurt. My neighbours will have to move out for the next three months before their lodgings are made habitable again. Luckily they had fire insurance,which will cover lost belongings as well as the costs of relocation.

Today I took out a fire/theft/liability insurance policy with my bank. The idea had always been at the back of my mind; this incident put it very much at the front of it. For a tenant like me, it doesn't amount to much: about $300 a year. Worth it in a city where we live cheek-by-jowl with who-knows-who.
Posted by Brian Campbell at 11:33 pm

Email ThisBlogThis!Share to TwitterShare to FacebookShare to Pinterest
Labels: BC personal

Glad you made it through safely.

Yes, glad you're safe. I was visiting my grandma in Arizona and a cigarette caused a fire that took a corner of the house. While we were playing Trivial Pursuit. Of course, that was Arizona, where anything with a spark can ignite a house, but it does make you think.

Yes, you never know what's going to happen. I've got renter's insurance, too, and keep it updated. Glad your place wasn't scorched.