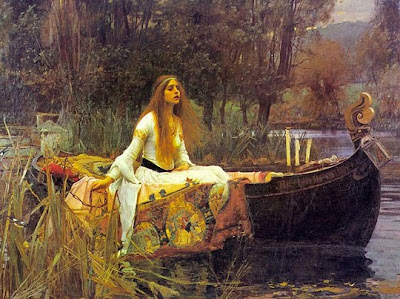 Last week we went to the J.W. Waterhouse exhibit, at the Musee des Beaux Arts here in Montreal – a huge, travelling retrospective that has done much to revive his work in the public eye.  I highly recommend this show, which runs till the end of this week. In all, we spent about two and a half hours enjoying the work of this British 19th C. master.

The renewed fascination with this work suggests something afoot in the zeitgeist, a return of interest in pictorial representation and in artistic interpretations of our mythological and religious past. It also, I daresay, partakes of the decadence of our own peculiar time.  All those thinly clad nymphs and cherubs rendered by Waterhouse and others served as softcore porn for a certain class of wealthy, repressed Victorian gentlemen. (The above doesn't quite serve as an example; you would have to go to the show to see what I mean!) His repetitive use of one, idealized model -- whose svelte figure conforms more closely to today's standards of beauty than say the women of Rubens or Renoir -- served as both his signature and to trivialize him. Nevertheless, paintings like The Lady of Shalott, above, are luminous masterpieces.

One can see why the post-WWI avant guarde -- a movement I very much appreciate, actually -- were so strenuous in their denunciations of this kind of work: would hate break the news to them today, but most of their own work doesn’t hold a candle to it.


For those who want to view and learn more about Waterhouse's art, check out this highly informative virtual tour put on by the curator.
Posted by Brian Campbell at 10:07 am