According to this study, food portion sizes grew by some 69% in paintings of the Last Supper over the centuries. It seems that super-sizing is not a recent phenomenon, but a trend over millenia. 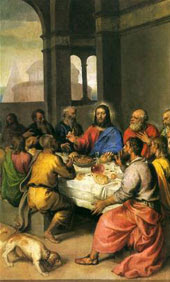 Of course, as I just wrote the author of the study, the growth in portion sizes depicted in those paintings could be as reflective of changes in aesthetics of those painters over the centuries, as in portion size per se (although doubtless portion sizes did grow). Medieval painters like Duccio above produced stylized expressions of austere ascenticism, whereas Renaissance painters like Titian were worldly, out-and-out sensualists. Paralleling this evolution, the mastery of visual perspective enabled more accurate depictions of the sheer physicality of things.

Interesting that as portion sizes grew over the centuries, halo sizes shrank. In the Medieval paintings, the halos look like huge plates you could eat out of.
Posted by Brian Campbell at 11:14 am

Email ThisBlogThis!Share to TwitterShare to FacebookShare to Pinterest
Labels: Art and Society