Robert Graves: The Poets and the Gleemen 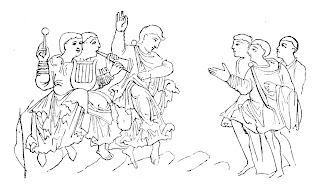 Gleemen's Dance, 9th Century. From Cleopatra, Cotton Ms. (British Museum)
Picking up Graves' The White Goddess, I came across this intriguing passage on poetry in midiaeval Wales.  If you substitute "print poets" for "court poets" and "spoken word artists" for "gleemen", you might find a not-so-far-off description of the state of poetry today!  Perhaps I'll call spoken word artists "gleemen" from now on...and bring gold torques, honey cakes and beefbones (especially beefbones) to the next poetry slam.  The parallels are fascinating...

In a sixth-century Welsh poem, the Gogodin, it is remarked that “the poets of the world assess the men of valour”; and the combatants—whom they often parted by a sudden intervention—would afterwards accept their version of the fight, if worth commemorating in a poem, with reverence as well as pleasure. The gleeman, on the other hand, was a joculator, or entertainer, not a priest: a mere client of the military oligarchs and without the poet’s arduous professional training. He would often make a variety turn of his performance, with mime and tumbling.

If the gleeman’s flattery of his patrons were handsome enough and his song sweetly enough attuned to their mead-sodden minds, they would load him with gold torques and honey cakes; if not, they would pelt him with beef bones.

… it is a paradox that in midiaeval Wales the admired court poet had become a client of the prince to whom he addressed formal begging odes and forgotten the Theme almost entirely; while the despised and unendowed minstral who seemed to be a mere gleeman showed the greater poetic integrity, even though his verse was not so highly polished.

NB:  ... by "the Theme", Graves means “the single poetic theme of Life and Death… the question of what survives of the beloved.” Here he quotes from the Welsh poet Alun Lewis...
Posted by Brian Campbell at 3:13 am

Kaie Kellough writes on a facebook crosspost (this is reprinted with his permission): hey buddy, you roused me. interesting post, dig. but on the subject of gleemen, or gleewomen, or spoken word artists being poor literary craftspeople, not always the case. dig cat kidd, or amiri baraka, or bp nichol. but on to spoken wo...rd. the gleemen & gleewomen have also developed their craft very carefully. for a straight spoken word poet the craft lies in the delivery, in sound and movement, in how body and voice interact in the realm of performance. at one end, spoken word meets literature, and can be good literature, but overall, it is not literature, it is word in sound and performance, so it doesn't even need to be literature. naturally, i prefer performers with strong texts, texts that i would like to read, but i also enjoy artists who privilege performance, and any time a person steps onto a stage in front of an audience, however literary they may be, they are performing, and have to reckon with the demands of performance, and whatever text they are based in, that text needs to be digested & transcended so that the performance is most striking.