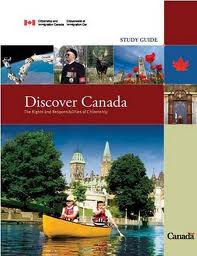 There's an excellent article by Stephen Henighan in Geist on the increased militarism and blatant right-wing revisionism in the most recent edition of Discover Canada: The Rights and Responsibilities of Citizenship, otherwise known as the Citizenship Guide, the booklet that introduces immigrants to Canada.  I was similarly creeped out by it when I last looked at it, in January.  (It's interesting to know what my immigrant students have to study to become citizens.) Other highlights Henighan points out: Medicare is bypassed in a fleeting reference to the Canada Health Act; Tommy Douglas isn't mentioned; the CBC, government aid agencies like CUSO and CIDA, the right to unionize, gay and lesbian rights also vanish. The only two waves of political refugees mentioned are Hungarians who "escaped Soviet tyranny" in 1957 and Vietnamese who "fled from Communism" after 1975, ignoring, of course, the thousands of refugees who fled military dictatorships in Latin America in the '70s and '80s.

As I point out in my comment to the article, the arts are as underemphasized as the military is over-emphasized in the guide – on the one page dealing with Canadian culture, some literary names are mentioned, but all those pictured on the page are sports figures. The only performing artists pictured in the whole guide are an anonymous Prince Edward Island fiddler, and in another small picture, a bagpiper and congo drummer in an open-air market. There is one poem quoted in full in the guide: John McRae's simultaneously magnificent and sanctimonious elegy, "In Flander's Fields". Plus, of course, our National Anthem and God Save the Queen.

Consider the cover of the guide: two pudgy Canadians paddling on the Rideau Canal with the Parliament Buildings behind them, who, in their identical red life jackets and yellow baseball caps, bring to mind the Mackenzie brothers. Other images: the Canadarm (yup! always of service to our big neighbors to the south), a bemedalled veteran, a moose, tulips in front of the parliament buildings, a maple leaf, an altar piece bearing a crucifix (National Assembly of Quebec? not sure here).

As if that’s not enough, the Conservative government has also beefed up the presence of the military in the citizenship ceremony, with members of the military seated on the platform with the presiding judge, standing in the receiving line congratulating the new citizens, even giving a two to three-minute speech.

Overall, the portrayal of our culture in the Guide is not only out-and-out militaristic, but almost unendurably bland…and gives the lie to the Canada I know well.
Posted by Brian Campbell at 1:00 pm