After the Mountain: The A.M. Klein Reboot Project 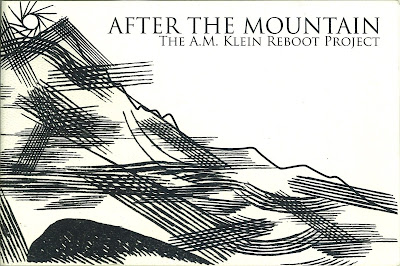 One of my poems got into this lovely Synapse Press chapbook anthology put together last November by poet and Concordia prof Jason Camlot to celebrate the launch of a new collection of essays, Failure’s Opposite: Listening to A.M. Klein, co-edited by Norman Ravvin and Sherry Simon (McGill-Queen’s UP, 2011).

In his call for contributions, Camlot wrote, "We invite reboots, remixes, rewrites and creative translations of A.M. Klein’s iconic poem, 'The Mountain'"  He went on to describe what reboots, etc. are:

The Reboot genre takes an iconic text or serial narrative and restarts its operating system from the beginning, in order to create something completely new, yet still affiliated with the original text. The Remix most commonly refers to an alternate version of a recorded song, giving new sound, accent, tempo and meaning to the original version. Creative Translation refers to the translation of a text into new terms of reference and situations of meaning, as well as a different language. 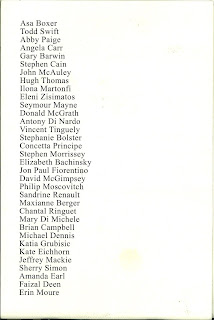 The call went out on Oct. 28, 2011 with a deadline of Nov. 15.  A remarkable number of poets responded, though -- the list, scanned from the back cover, can be seen to the left -- and what they came up with in such a short time is impressive indeed.  Nearly all of them sincerely heeded the call, engaging with the poem, feeling it out, entering its world and selecting choice elements, or dismantling and reconstructing it in cohesive recombinations that could well have been original poems, integral unto themselves.
Confession: I was one of those (and I suspect only one other) who didn't go through that process.
For me the call came as a particularly amazing bit of synchronicity. Just the week previously, I had completed my own poem, "Mountain", as a part of a sequence on our apartment and neighbourhood which will appear in my own forthcoming collection (I've been living within view of Montreal's mountain for more than twenty years.) I had no idea at the time that Klein had written about the selfsame mountain -- and in a way, I'm glad I didn't, because had I been aware of his poem, I doubt could have composed my own as I did. The coincidence, though, was quite compelling.  As if the local zeitgeist had suddenly reared its head with poetry on Mont Royal in its mind...
As it is the two poems -- mine and his -- do bear some extraordinary resemblances. The first line in both highlight the cross -- in Klein's poem, "Who knows it only by the famous cross which bleeds/into fifty miles of night its light" -- and both emphasize the mountain's looming ancientness.
Beyond that, as could be expected, the poems take quite different directions.
Since this chapbook only circulated some 125 hand-numbered copies, I take the liberty to reproduce my poem here. (I notice fellow contributers Abby Paige and Stephen Morrissey have done likewise on their blogs.)
MOUNTAIN

We’ve tunneled through you,
necklaced you with roads, paths
apartments, mansions clutching
like pearls at your throat.

You who came thrusting
forth in ancient storm of magma,
who rose
earthen breast, back
primordial.

We live beside you in tiny flats
watch ghostly screens,
eat, recline,
groom ourselves for the daily backandforth
don leather
for nights in halogen town.

Still—certain hours—you block the sun:
chilled by your encroaching gloom,
we peer from windows, terraces, to see you
throw off our ropes and stays, to loom.
Posted by Brian Campbell at 2:55 pm