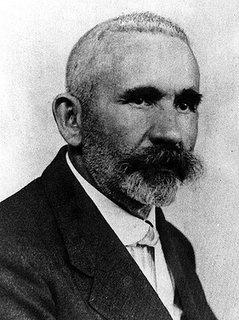 Little known outside of professional psychiatric circles, the work of German psychiatrist Emil Kraepelin has by now gained a far more pervasive influence on the current practice of psychiatry than that of either of his contemporaries, Sigmund Freud or Carl Jung, or even for that matter the later behaviourist B.F. Skinner. It was he who, assuming mental illness to be of biological origin, evolved the diagnostic categories -- depression, manic depression, and dementia praecox (later called schizophrenia) -- that form the basis of all major diagnostic systems in use today, in particular the American Psychiatric Association's DSM-IV and the World Health Organization's ICD (With his colleague Alois Alzheimer, he also is credited with co-discovering Alzheimer's Disease.)

Part of the reason K. never caught on with the public is that his writings are far more pedestrian than those of Freud or Jung; his notions, such as he enunciated them in the early '20s, lacked paradigmatic appeal. It would require the development of Big Pharma starting in the '50s to give Kraepelin the almost ubiquitous significance he has today.

But such as it is, his detailed work on manic depression, even by today’s standards, is truly impressive. He not only mapped out the poles of bipolar, but also the less well-known mixed states (agitated depression, racing paranoid or suicidal thoughts while lying on the couch, etc.) in considerable detail. He was a great empiricist: he had a talent for amassing huge quantities of seemingly contradictory data and laying it out in broad, compelling categories.

And yet, there is something disquietingly cold-blooded in Kraepelin’s descriptions of his patients (rather, subjects). That cold-bloodedness is representative of much of what goes on in psychiatry today: medical professionals who for the most part have never been touched by the symptoms they treat, smug in their assumptions of superiority, generally slighting of those with a condition that, while it can be, in extreme cases, truly debilitating if not downright fatal, has also truly enriched humankind, particularly in the realm of the arts.

Manic Patients are (his writings, taken from Godwin and Jamison’s Manic Depressive Illness)

convinced of their superiority to their surroundings…Towards others they are haughty, positive, irritable, impertinent, stubborn… unsteadiness and restlessness appear before everything. They are accessible, communicative, adapt themselves readily to new conditions, but soon they again long for change and variety. Many have belletristic inclinations, compose poems, paint, go in for music. . . Their mode of expression is clever and lively; they speak readily and much, are quick at repartee, never at a loss for an answer or excuse…

Their life is invariably a chain of thoughtless and extraordinary, not infrequently also nonsensical and doubtful activities… Many patients join new movements with fervent zeal which rapidly flags…make purchases far beyond their circumstances… (1921)

K. goes on to discuss a milder form of manic temperament within the domain of the normal but still a link in the long chain of manic-depressive disposition, a form that progressed to what he called the "irritable temperament". This too is perhaps as revealing of K. as the subjects he purports to describe:

It concerns here brilliant, but unevenly gifted personalities with artistic inclinations. They charm us by their intellectual mobility, their versatility, their wealth of ideas, their ready accessibility and their delight for adventure, their artistic capability, their good nature, their cheery, sunny mood. But at the same time they put us in an uncomfortable state of surprise by a certain restlessness, talkativeness, desultoriness in conversation, excessive need for social life, capricious temper and suggestibility, lack of reliability, steadiness, and perseverance in work, a tendency to building castles in the air… periods of causeless depression and anxiety… (1921)

Sounds rather like -- who guessed it? (My castles, though, are real, he he)

It is said that Ludwig Van Beethoven refused to move into a flat on a treeless street, declaring, "Sometimes I prefer a tree to a man." As long as men like Kraepelin remain in the ascendant, people like me are likely to prefer trees as well.
Posted by Brian Campbell at 1:25 am

Thanks for the fascinating information. I did a bit of research of my own, and discovered that the Wikipedia entries on K in English and in German reveal an interesting difference in emphasis: in contrast to the English site, the German site mentions that K is seen as the founder of psychopharmacology only to claim that such an understanding is a distortion of his work, which was focused less, the entry continues, on pharmacological treatment than on classification of diseases.

True; he came up with the categories; the shock treatments, lobotomies & pills came later.

my limited experience in psych leads me to believe that e.k. was likely not free from the disorders to which he was condescending. also, i think any decent empiricism requires a level of coldness/cold-bloodedness but not callousness. i think you're pointing to the latter in his writing and attitude, but the former tone often arises out of objective approaches.

the difference between the capturing of collective imagination and pseudo-celebrity, as with freud, may have more to do with the mystical aspects of psychoanalysis, the less pragmatic and more fantastic.

A.D.: good points. Actually Kay Jamison beautifully articulates the same defence of a decent empiricism in the quote hyperlinked to the words "generally slighting" above...rather a too-subtle way, on my part, of conceding a point, I must admit! Anyway, click on it to see what I mean. As for K. himself, word's out: not enough is indicated in the bios I've read. Looking at his writings and tables of statistics, I get a very Stanley Steamer feeling about the man: like so many statistical research scientists, steady, thorough, methodical, hard working, certainly not prone to fits or calamitous ups and downs.

... oh yes. Not to mention a little biographical entry I read by a colleague of his (in a footnote in that massive tome by Jamison & Godwin) that described him as steady, persistent, pleasant but rather cool, punctual and routine-driven as Kant, & concerned with the general picture more than the individuals he was studying... these are general impressions of that entry, and maybe I'm confabulating a bit. (Confabulation being a talent of mine...)

Oh yes (again)... here's another quote of Jamison, made a month or so ago on this blog -- I cut and paste rather than make the effort of hyperlinking:

Attributions once made to the gods or the muses (Gerard Manley Hopkin’s “sweet fire the sire of the muse,” Emerson’s “all poetry is first written in the heavens”) have been transformed into the 20th century’s rather more prosaic constructions of “primary process,” “prelogical thought”, and “bisociative thinking.”
-- Manic Depressive Illness, p. 337