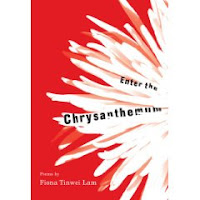 Here’s a book I very much enjoyed this summer: Enter the Chrysanthemum by Vancouver poet Fiona Tinwei Lam. Her poems express powerful, simple emotions with extraordinary clarity and restraint; at times they are written with an almost oriental sense of delicacy, betraying the author’s Chinese-Canadian upbringing (although there is a twist: she was born in Scotland.) Lam handles family and childhood very well; her style and sensibility put me in mind of Li-Young Lee.

Actually, there’s a personal connection with this writer. I met her at the League of Canadian Poet’s Conference/Fest in Vancouver last June, where she was also launching her book. I was immediately impressed by what she read; we later traded books, and have been corresponding. About the relation of her verse with that of Li-Young Lee, she writes,

I love Li-Young Lee's lyrical voice, and his work is a real inspiration. His tone, his style of remembrance differ from mine in that I probably "twist the screw" so to speak in my last lines in a way he doesn't--a different path to insight perhaps. I'd say his poems are more formally "beautiful", and that he makes different use of rhythm and repetition. I probably tend to be more direct, using a super- distilled version of ordinary or even conversational speech, rather than elevated speech.

Below are three favourite poems from Chrysanthemum, posted with her permission.

I want to say Make love to me
but instead, I mention the weather—
after weeks of damp, the air
is as mild as spring’s, the skies
swept clear of cloud.
I’m restless, tired of my tower
of virtue, this higher ground.

I want to say Climb up.
These nights alone,
I’ve made my hands yours,
the gaze of your palms
upon the gaze of my flesh.
You’ve opened me. I’m here,
waiting. Enter
what I’ve let no man enter:
Let us become
first woman, first man
in the garden of our limbs.
I’m eager for your body’s salt.
My hair flows down.

These days, every hour or less,
a phone call from my mother.

She flails and clutches at me through the line.
Help me. But I can’t drag her out.

What’s left of her memory,
a skim of debris
that disintegrates while she flounders.

Words have no arms.
I love you saves no one
and soon I’ll cry too
from what’s gouged away
beneath the soothe and lull
of my voice.

I’ll coax out a blanket of sleep
and tuck it around her,
make her forget the forgetting.

Until the numbers too begin drifting
just out of grasp. Just like the daughter
I will no longer be.

Those mornings we’re together, the three of us
stand in the spray of soft diamonds—sunlight
through glass, and everything sparkling.
You hold our son high in your arms
while I lather him up. Our little otter,
he’s as sleek and slick as when he slid
from my womb. Then I lather you,
foot to thigh, chest to back—the heft and sinew
of what I have loved. You and he both
turn in the warm rain, my universe
of king and prince rinsed to glisten.
When you soap my skin, I live,
become brief silk in your hands, as luscious
as when your desire flowed. Only water
will love me when you are gone.
Posted by Brian Campbell at 9:18 pm

There are times when she uses a lot of monosylabic words:

"I want to say Climb up.
These nights alone,
I’ve made my hands yours,
the gaze of your palms
upon the gaze of my flesh."

Broken on upon. I like the effect this creates, of simplicity, broken by the arrangement of the words themselves, or sometimes by the more intricate words that are soon to follow.

I'm glad you enjoyed it, you two. That's a perceptive observation, Kieth.