Review of Jocelyne Dubois' World of Glass in Montreal Gazette 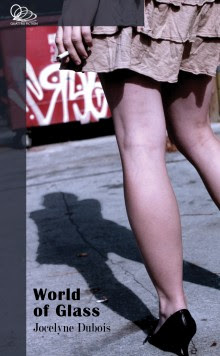 My wife Jocelyne Dubois' debut novella, World of Glass, was reviewed last May in the Montreal Gazette, both in print and online.  A very touching, perceptive and eloquent review by Madeleine Thien. Thien is the award-winning author of Simple Recipes, Certainty, and Dogs at the Perimeter.
It is reproduced here. 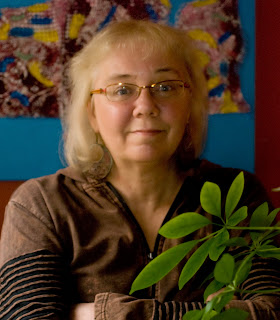 Jocelyne Dubois makes powerful observations about the mind’s interior in World of Glass, narrated by a Montrealer whose joy gives way to terror.

In Jocelyne Dubois’s debut novella, World of Glass, a young woman named Chloé arrives in Montreal. She is poor and “knows no one in this city,” but she is happy. These streets will be a testing ground for her, a place to build her dreams.

At first, Chloé excels. She falls in love and Montreal takes on a new radiance. She is aware, perhaps even hyper-aware, of small details: the particular colour and shape of things, the way objects touch but never merge. Her paycheques arrive and she imagines furnishing her apartment: accumulating new sheets, a table and chairs, waiting patiently for “a vase I truly like.” Her life is about to be filled in. “I am young still, I belong,” Chloé tells herself. “I speak French to Claude and to everyone in this city. This creates a new person in me. The way my laugh comes from deep within.”

When the love affair ends, Chloé finds herself retreating from the world. At first her grief feels like something familiar, a ripping heartbreak, but then it grows into a more insidious disturbance. She is constantly afraid. Soon, Chloé can barely speak. She looks out at the books piled up on her floor, “Books I have not all read. Books I cannot read now.”

What follows next is unexpected and terrifying: Chloé falls through the looking glass. The old Chloé disintegrates (“I am invisible to everyone I pass”) and a new one comes into existence in a locked psychiatric ward in a Montreal hospital.

She writes with a dimensionality that resists the simplified ways in which both the hospital and the outside world might render Chloé. She writes, in fact, with a kind of passionate realism — an extraordinary feat when describing a setting in which feeling and colour are wiped out to make a “safe” environment. Despite the fog of over-medication, Chloé never stops observing details: a man who lies on a sofa, his “faded blue packsack crushed against his chest,” or the “short, silver hair” of the psychiatrist. Hibiscus flowers are “erect pistils surrounded by frilly skirts.”

The opening image of Montreal is overlaid with a detailed rendering of the locked ward so that what is real and what is mad, what is visible and what is hidden, are offered as part of a surreal double exposure:

“I sit next to a woman who holds two knitting needles but no wool. I watch her knit invisible wool.”

“Betty walks in and says, ‘You’re ready for the day room.’ ”

These tense sentences have a cumulative power, like watching someone slowly tear apart a piece of fabric.

Halfway through the book, a woman named Louise pays a visit to Chloé. Louise, it turns out, is a writer working on a play about madness and she wants to see where Chloé sleeps, to find out “what it’s like to be on the inside.” She takes a tour, all the while scribbling notes, and leaves after a “polite hug.”

Afterwards, Chloé tells us, with just the hint of a smile, “It occurs to me that Louise forgot to ask how I am.”

Dubois is not Louise; she is not that kind of writer. She has not come to borrow or beg, or even simply observe.

Rather, Chloé describes her world (objects, ideas, family) with a frank precision. Illness has re-drawn her life and, more than ever, details matter: the world of glass, despite its myriad fractures, is real. Chloé knows that her disease, a chemical imbalance of the brain, is perceived by others as a spiritual failing. Yet the beauty of the text shimmers with a brave awareness: we only have this single, brief life and the way that we perceive the world is, in the end, what makes it ours.

Like other celebrated Montreal writers, from Hubert Aquin and Lise Tremblay to Nelly Arcan and Rawi Hage, Dubois writes provocatively about mental illness and those who fall below Montreal’s smooth surface. World of Glass discovers the woman that Chloé becomes, the love she chooses, and the hesitant rebuilding of family, trust and self. It is a remarkable work.

Madeleine Thien is a Montreal-based writer. Her most recent novel is Dogs at the Perimeter.
World of Glass by Jocelyne Dubois Quattro Books 120 pages, $14.95
© Copyright (c) The Montreal Gazette
Posted by Brian Campbell at 8:00 pm