People say that children see and hear things
they themselves cannot see or hear,
and this child breaking into
the room to hug and kiss
his grandmother, Wilma,
hasn’t seen me yet.
I am afraid of his eyes,
touching like a hummingbird
the cornea of my eyes.
I don’t want him to see
the puddle of
old pain and rusty love
that grows inside of me,
the spider web of my disappointment,
a beaten heart that
has never overcome the loss of him.
I am afraid of this child
running around with his two frank
years, afraid of me breaking.
I’m sure he would scream
if I let my pupils touch his,
and the room would look
at me knowing the truth of
what he sees.
I am afraid and old,
smashing day after day
a memory of innocence.
I know too much.
My mind is fragile. 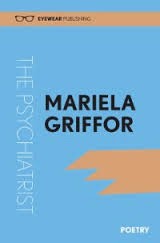 This is a favourite poem of mine from “The Psychiatrist”, Mariela Griffor’s latest collection, sent to me for review by Eyewear Publishing last year.  Searingly poignant, simply put, the poem expresses — in a way I don’t think I’ve seen elsewhere — how one can feel confronted and even intimidated by the innocent life force of a young child.  With this poem, I have only one — albeit small — quibble: it’s with the antecedent of the pronoun “him” in the line “has never overcome the loss of him”.  We can assume it’s not the child itself, but a man, an adult love to which she is referring — Ignacio, perhaps, mentioned in an earlier poem, or the unnamed subversive in “Love for a Subversive”, the unnamed lover in “Rain”?  There is probably some way around this, but at the same time, that pronoun in this poem has its own brute force.

Mariela Griffor was born and raised in Chile, and came into adolescence and early adulthood under the Pinochet regime.  As a young woman, she joined a revolutionary group, and doubtlessly ended up on a blacklist.  In 1985, she left Chile for Sweden under involuntary exile.  Much later, in 1998, she moved with her American husband and two daughters to the United States, where she is now Honorary Consul for Chile in Michigan.

Here are poems of subversion, exile, and solidarity that ache to be told: elegies for friends who were tortured or disappeared, evocations of nights of insomnia, furtive meetings under code names, a character sketch of a relative who was a possible undercover agent for DINA (National Department of Intelligence.)

All contemporary Chilean poets – indeed, Latin American poets – write under the shadow of Pablo Neruda.  Indeed, Ms. Griffor will soon be coming out with a new translation of his Canto General, published by Tupelo Press. Her own style, though, doesn’t bear a trace of his lush, surrealistic influence.  She reminds me of certain Eastern European poets — Czeslaw Milosz, Tadeusz Rozewicz, Wislawa Szymborska among others  — or of her own countryman, Nicanor Para: poets that speak unvarnished truths with simple irony and measured declaration. In some later poems in the collection, the Griffor’s free verse becomes rather too prosaic for my taste:

My grandfather did not talk about what Mr. Monzalves said,
but it was clear that he knew that my grandfather
was a sympathizer of Allende and that he had come to deliver a warning.
Just before I left Chile the last person I met from the Front
in Santiago was my commander
His real code name was Wolf.
I told him I was planning to leave the country because I could not avoid the surveilland anymore and my good friend,
the lawyer Inunza, had arranged for me to go to Sweden or France.
(Exiles)

In a patch like this one, I wish that the author had fashioned an introduction or searched more deeply for lyricism in her subject matter.   In most places, though, her straightforward style has its own strength and sensibility.

The title of the collection raises expectations that it will concern mental illness, or perhaps relate a series of psychiatric consultations.   The brief title poem, however, is the only one where a psychiatrist is featured; there he figures as a voice of authority in the narrator’s head that the poet summarily shoots down to get on with her life.

Mariela Griffor’s “The Psychiatrist” is well worth buying and reading.  I look forward to seeing more of her work.
Posted by Brian Campbell at 9:26 pm