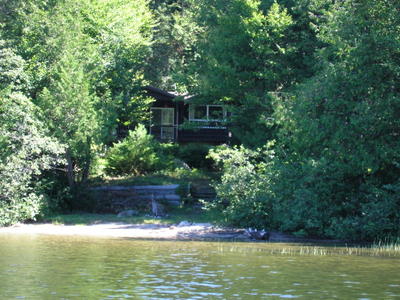 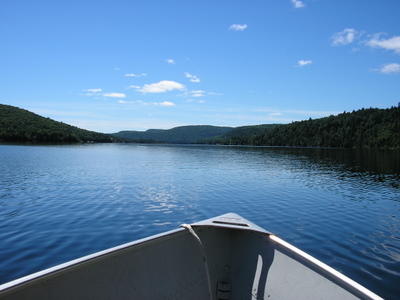 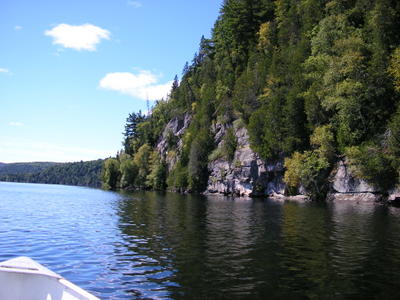 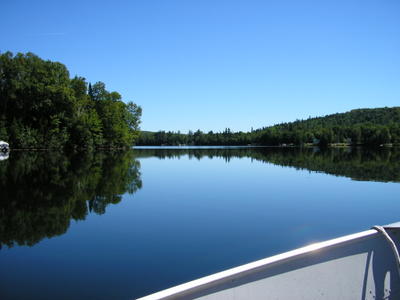 Up top is the cottage we stayed at this summer, and below, pictures taken on a boat ride around the lake. Lac des cornes, near Mont Laurier, is in the Laurentian Mountains, about three hours' drive north of Montreal. (If you click on any picture and click again on the enlarged image that appears, you'll feel like you're there...especially if you have a wide screen!)

Actually, I have to admit these were from last year. This year, although the weather behaved beautifully all through the summer, it decided to take a gloomy turn as soon as we arrived -- raw winds, rainy, and cold! Temperatures dipped to about 6 degrees celcius (about 45 F) at their worst (it's always a lot cooler up here than in Montreal.) After four days of waiting out the weather -- fortunately broken by one sunny morning where we went canoeing -- we got cabin fever. When the long range forecast suggested no improvement, we decided to cut our losses and come home.

Nevertheless, the silence was beautiful, and as you can see, we were practically all alone up there with a cast of loons, hummingbirds, chipmonks, squirrels, crows, herons, etc. A flock of about five chickadees that liked to hang around the cottage would fly down from the trees and eat sunflower seeds from our hands. (Pictures to come... they're still in my camera...)

Besides writing two short poems and a draft of a longer one, got lots of reading done -- mostly Thoreau's Walden (an obvious choice), Anna Akhmatova's Selected, & Robert Bly's American Poetry: Wildness and Domesticity, a book of criticism I'd highly recommend to anyone (particularly you self-described sincerists out there).

The cottage we were in, by the way, was one of the first ones on this lake. It was built around 1980. The whole north side of the lake is still virtually uninhabited. And there are thousands more lakes like that up here -- more than eight thousand at last count! Ah, unspoiled wilderness ... one of the richesses de vivre dans le Québec...
Posted by Brian Campbell at 2:30 pm

What an incredibly beautiful place. My wife loves canada & would love to go there some day. Thanks for sharing these pics :-)

My family used to have an original cottage on the lake since the early 60's and I can atest to the beauty and temperment of the lake. Alas we drifted away in the late 80's. Please share where you acquired information about renting or accomodation on the lake. Thanks