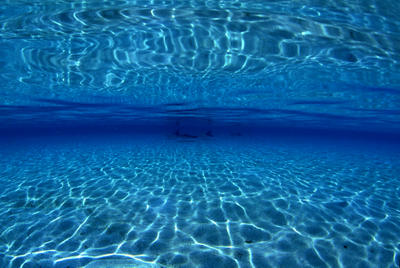 Some time ago I found this piece by Greg Dilley, a Nichiren Buddhist writer and fellow-member of SGI, which I hoarded away and saved for an occasion like this one, when I don't feel like composing something of my own. Dilley, besides being an accredited Ninja of all things, is professional deep-sea diving instructor. The photo is by one Japanese underwater photographer named Sammy.
____________________________________
So who are we? Where did we come from and why are we here? One thing we know now that we didn’t know merely a decade ago is that perhaps as much as 97% of the inhabitable space on the planet is in the deep ocean. Most of the biomass on Earth resides in these depths.

Humans use terms such as “islanders” and “mainlanders” to separate themselves into tribes according to the proximity to the ocean and size of their terrestrial world when in fact we are all islanders compared to our relative place on this blue ball.

Even our mammal cousins such as the seals, seal lions and otters had the common sense to return back to their original home. It’s hard to imagine that the ancestors of whales and dolphins ever spent much time on land at all.

What is less known is that the previously dominant life forms originally residing in our oceans, microbial life, created their own extinction through the creation of the waste gas oxygen. Now mankind finds itself threatening the future of all terrestrial life as carbon dioxide levels rise threatening our atmosphere and everything it supports. As well, our coastal waters are being fished into oblivion as tons of unused, dead by-catch is dumped back into the sea in exchange for each meager haul of usable, edible fish.

Mankind is rushing towards our own demise. Unstoppable, the power of profit is mistaken for the quest for survival. It speeds us along like an evil destructive force, or perhaps this force is merely the eternal force of nature itself. Perhaps it is nature’s plan that each species has a limited time on Earth. At times when one looks at the damage we do to our world it seems that there is a global human consciousness at work, rushing to inflict as much harm as possible until our time runs out.

On the other hand there is that part of human awareness struggling to understand our true place in our biosphere and to find ways to coexist, therefore lengthening and extending our rule over our domain. Less than 20 years ago we had little idea of the extent of the diversity of creatures residing in the oceans we have lived next to since the time when we slept in trees and caves.

Since primordial ages men have searched the heavens for signs of God and have directed their prayers skyward. These same ancient men also regarded the ocean depths as a place of unknowable evil. Unseen, unknown, its depths foreboding and dark, the deep ocean realms represented hell incarnate.

For the underwater-traveling human being, the water world is Earth set upside down. To look up one sees the smooth glassy bottom of the world, to look down is to peer into a dark, limitless sky.

One thing is for sure, we live because the ocean lives.
Posted by Brian Campbell at 12:01 am

The gallery link is amazingly beautiful. Having always been a sea person, this esp resonates. When I lived in Hawaii years ago, a poll ran in the newspaper asking if people felt 'trapped' living on an island or not. It had never occured to me to even think that way since the sea was simply an extension of where I was. To my surprise, non-native Hawaians DID state that they felt trapped there.

Oh this ocean does me good. Thanks for the link.