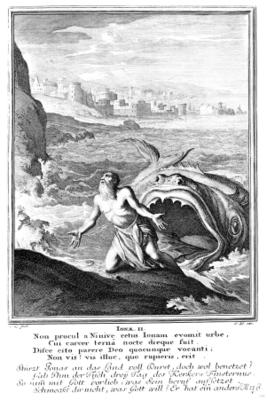 Moyers: My favourite scene [in Starwars] was when they were in the garbage compactor and the walls were closing in, and I thought, "That's like the belly of the whale that swallowed Jonah."

Campbell: That's where they were, down in the belly of the whale.

Moyers: What's the mythological significance of the belly?

Campbell: The belly is the dark place where digestion takes place and new energy is created. The story of Jonah in the whale is an example of a mythic theme that is practically universal, of the hero going into a fish's belly and ultimately coming out again, transformed.

Moyers: Why must the hero do that?

In the first stage of this kind of adventure, the hero leaves the realm of the familiar, over which he has some measure of control, and comes to a threshold, letus say the edge of a lakeor sea, where a monster of the abyss comes to meet him. Then there are two possibilities. In the story of the Jonah type, the hero is swallowed and taken into an abyss to be later resurrected -- a variant of the death-and-resurrection theme. The conscious personality has come in touch with a charge of unconscious energy which it is unable to handle and must now suffer all the trials and revelations of a terrifying sea-journey, while learning how to come to terms with this power of the dark and emerge, at last, to a new way of life.

The other possibility is that the hero, on encountering the ower of the dark, may overcome and kill it, as did Siegfried and St. George when the killed the dragon. But as Siegfried learned, he must then taste the dragon blood, in order to take on something of that dragon power. When Siegfried has killed the dragon and tasted the blood, he hears the song of nature. He has transcended humanity and reassociated himself with the powers of nature, which are the powers of our life, and from which our minds remove us.

You see, consciousness thinks its running the shop. But it's a secondary organ of a total human being, and it must not put itself in control. It must submit and serve the humanity of the body. When it does put itself in control, you geta man like Darth Vader in Star Wars, the man who goes over to the consciously intentional side.

Campbell: Yes, that's the figure that in Goethe's Faust is represented by Mephistopheles.

Moyers: But I can hear someone saying, "Well, that's all well and good for the imagination of a George Lucas or for the scholarship of a Joseph Campbell, but that isn't what happens in my life."

Campbell: You bet it is -- and if he doesn't recognize it, it may turn him into a Darth Vader. If a person insists on a certain program, and doesn't listen to the demands of his own heart, he's going to risk a schizophrenic crack-up. Such a person has put himself off-center. He has aligned himself with a program for life, and it's not the one the body's interested in at all. The world is full of people who have stopped listening to themselves or have listened only to what their neigbours to learn what they ought to do, how they ought to behave, and what the values are they ought to be living for.

__________________________
As one who has lived the the story of Jonah in a special way himself -- this poem is the expression of that -- I find it a bit simplistic of Campbell to say that Jonah comes out of the whale "transformed". Jonah comes out of the whale with his psychological baggage pretty well intact -- his pride, his expectations, his loneliness and profound self-hatred, which he projects on Nineveh, on the plant that grows to shelter him, on God and on life itself. When things don't go as he wishes them to -- when he discovers that he is an unconscious agent of a healing process that leads the big fellow upstairs to stay his hand although it ultimately betrays Jonah's prophesy, Jonah's self-esteem as a prophet is profoundly upset. He goes out to the desert to kill himself through exposure to the heat of the sun (could be seen as the heat of God, of course), but can't even succeed in doing that. Despite himself -- despite the fact that he is a truly screwed-up human being, as so many of us are, and as we all are on deep levels -- his life force is so strong that he keeps reincarnating into the same old griefs, staying very much the same damned (Biblically damned, as well as personally damned) person, while bringing salvation to others despite himself. The resolution of the story is famously inconclusive. What I find interesting is that Moyers found the walls closing in reminded him that story -- the very image to be found in my poem. I hadn't seen Star Wars when I wrote it, if that has to do with anything -- in fact, I still haven't (I feel like the only person in North America who hasn't). Walls closing in is not, after all, an uncommon metaphor for personal oppression. Actually I was writing out of the extremes of a personal depression, which for me at that time was the belly of the whale, so to speak... (By the way, the poem was written as far back as '88... it's at the point where it feels like another person wrote it, although that person is definitely still me...strange, isn't it?)

As much as I love the man and his work, I always felt a certain ambivalence about Joseph Campbell's interpretation of mythology, and this may explain why I haven't felt strongly motivated read more of him. The thing is, the interpretation is so prominent, and interpretation, while it functions to underline the contemporary relevance of myth, can be altogether too neat. With the help all those Freudian/Jungian concepts, all is kept safely under glass. We are of course so cut off from our mythological sources that J.Campbell serves, as I've said before, as an excellent bridge to those sources, but the bridge can all too easily get in the way. Far richer it is to go directly to primary sources oneself -- the texts are all there, even some of the practices -- and live and interpret them through your own life, rather than have them interpreted for you.

Speaking of the shortcomings of orthodox religion, Joseph Campbell could be speaking about himself: "The mystery has been reduced to a set of concepts and ideas, and emphasizing these concepts and ideas can short-circuit the transcendent, connoted experience. An intense experience of mystery is what one has to regard as the ultimate religious experience."(Power of Myth, p. 209)
Posted by Brian Campbell at 9:16 pm

I like Joseph Campbell mainly because he makes me think. In many ways, he's a myth in and of himself, since he imbues the world with meaning for us again, be it true or false. Jung's work has always done that for me. Believing the interpretations of either men is simply a decision or a leap of faith. When I feel larger inside because of what I read with them I go with it.

Oh, I think he's quite true in the paralells he describes. In our global village era, the advent of a great interpreter of the world's religions and mythologies has been inevitable. He drew the outlines of a tremendous map; his critics and successors are filling it in. Somewhere, though, in my files I have a quote from Pema Chodron that I'll post, about the fundamental need to "choose one boat" which will illustrate more clearly what I'm driving at.