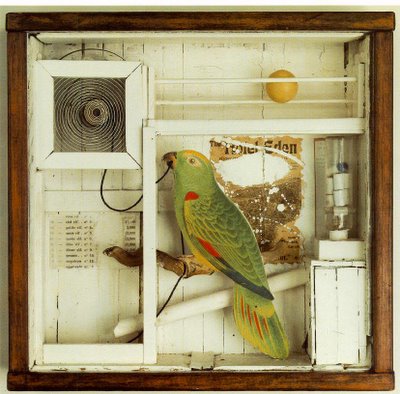 The last few days much of my blog-writing energy has gone into this spirited discussion on David Leftwich's blog. Since this kind of debate is part of my own process, and since I think it would be of interest to more readers than the worthy (and perhaps not-so-worthy) few who trip and trickle into his blog, I've taken the liberty of cutting and pasting here. Following on some remarks of Thomas Basbøll's about random processes and art in relation to possibilities unwittingly suggested by Flarf poetry, David did a Google search of the rhyming words of Shakespeare's Sonnet One, and took the first full sentences that came up. The sentences can be found here. Following these, he came up with these reflections and a challenge.

Are these poems yet? A collection of found objects? Readymades? Or raw material in need of “weeding” and “workshopping” (or "worshipping", according to spell check)? Most art that uses found objects, like Cornell’s boxes, relies on the artist to “edit” and juxtapose according to his or her “vision.” But is randomness, or at least structured randomness in this case, also art?

At the very least, this is a collection of raw material to be manipulated/transformed/workshopped edited into something else. I might try that in a following post, and the material is open for anyone else’s use. It would be interesting to see what becomes of this language in the hands of various writers.

Here's some of the discussion that ensued.

As Jean Clay writes somewhere in his great critical study of Modern Art 1890-1918, the introduction of "systematic randomness" left art virtiginously free. The trouble is, a process where the heart is absent for the creater offers little or nil for the heart of, in this case, the reader. Ibid for the rigidly stylized illusionist products of the Institute and the Salon. Contrast with, say, the poetry of Ilya Kaminsky.

P.S. Thanks for the flarf link. I think we have the makings of a blog post chez moi...

Brian, you might be right about pure randomness (and randomness in art is nothing new) will ultimately fail, or run its course, as an aesthetic project. So can a poem be whittled down from this raw material (which I think is what Basboll is suggesting)? Would the 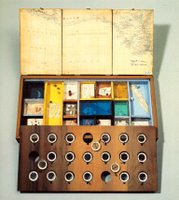 creator then be present in such a process?

However, randomness does create some interesting juxtapositions? Also, does it serve to eliminate the ego, the arrogance of the creator? Something Mac Low explored using chance. Does art, art we usually conceive it, depend on the ego, the individuality of the creator? Is art ego?

Of course, randomness does create interesting juxtapositions, and to the extent that life is random, there is a place for randomness in art. I really doubt though that the systematic use of randomness in art eliminates ego, and indeed believe the project of "eliminating ego" is not only impossible and undesirable, but the most phony and arrogant assumption behind such an aesthetic project. (Notice too how some of the purveyors of such "art" are so adept at promoting themselves and climbing into the art establishment...)

To me art only grabs me when it expresses the whole human being who created it -- ego, heart, lungs, belly, balls (or vagina), aspirations, cosmos. I'm not talking about any quality you can measure -- just the feeling you get when you read a poem by say Vallejo that "his whole life went into this poem". If my whole being is there to appreciate a given work of art, it is up to the being of the creator to be all there in his art, wouldn't you say? Personally, I have no choice in the matter: I just can't have it any other way. (And I don't think you can either, David...)

To my mind, the Google searches you've done here are a bit too random (or arbitrary), 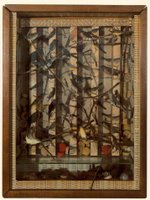 but, you're right, the trick is to see where workshopping them might lead, not simply to present the Google searches as poems.

As Gary Sullivan notes, 'Not too long after 9/11, people began posting again, though now all of the flarfs-many of which were parodies of AP News items-in some way shape or form addressed the aftermath of 9/11, including media portrayal of same. I remember, for instance, Katie's "We'll rebuild the Twin Towers-on your Pizza" (which I think was published in the latest online edition of Arras). I started a "sadness" series-doing searches on "The horrible sadness," "the awful sadness," "the unending sadness," etc., in response to what was becoming a kind of stifling national(ist) mourning.'

There is nothing especially "random" about that procedure and part of the utility of Google lies in using it precisely as a search engine.

Since the poet will be "sculpting" the final material and will have made decisions (search terms) in finding it, there is no reason to think that Flarf poems have "no ego" or are unrelated to "the whole life of the poet". But there are specific reasons not dwell on the relation between a poem and the poet's biography.

Flarf is way of avoiding (though not a sure way) that "the feeling you get when you read a poem" is not taken as a representation of the feeling the poet had when writing it.

That said, I think Brian's idea that we use our "whole beings" to appreciate works of art is a bit unrealistic. Or maybe I would qualify it by saying I use my whole being such as it is to read poetry and I much prefer poems that clever people put together out of things lying around in plain view to poems that creators found in their hearts.

Thomas, what makes “the clever people’s” poem interesting? Is it just its cleverness? Or is there also something else that makes the poem tick/click/work whatever word you choice? From corresponding with Brian in the past, I think he is suggesting that poetry, and art in general, works on many different levels, not just on the level of intellect, an idea I agree with. Of course, if we had the definitive answer about how poetry works we wouldn’t be having this conversation, which is what made your original post so interesting – the implications of reshaping existing language in our own image.

Brian, I agree that you can never actually remove the “ego”, the “self” from art. That’s why I ended the last comment with that question. Art is ego, or at least the production of art, even the CHOICE to produce something randomly, evolves the “ego”/”the self.” But I’m not sure the desire to “eliminate ego,” even if it is in the end impossible, is always “arrogant” or “phony.”

For instance, Mac Low was Buddhist and influenced by the teachings of D.T. Suzuki. And “randomly” opening Suzuki’s “An Introduction to Zen Buddhism” I saw this passage, which I had underlined:

“Life is an art, and like perfect art it should be self-forgetting.”

I think Mac Low was genuinely attempting to explore the possibility of “eliminating ego,” forgetting the self in the Buddhists sense. And as someone influenced by Buddhists thought I find the idea intriguing as well, even if, at least in my hands, it would be a project doomed to failure. I remember Peter Matthiessen writing about his conflicts between what he perceived as the egotism of his writing and his Buddhists beliefs. Maybe the only real way to eliminate ego from art is silence, to produce no works at all. Or is that also a choice involving the “ego?” Ah, it seems there is no escaping the bastard.

As for randomness as a technique I do find it interesting less for its ability, or lack there of, to mask the ego (the creator) but as a way to examine how language interacts, how surprising juxtapositions may create the shock of art and what that teaches us about how art works, and about the role of the artist.

Which I think is what Basboll was ultimately interested in. I think he was interested in how a poem is edited down/whittled/”workshoped.” Can the poet shape the raw material provided by the information age into a poem, the “ego”/”self” still very much involved in the process? I introduced the randomness as a way to generate the raw material, but not to really be the end product (though I think it was worth at least examining). Just as an experiment would you be up to (and any other poet could try it as well) attempting to create a poem from the mass of language I generated? Maybe choose the language from one search or from all three. I’ll give it a try over the next week – I’m traveling for work all this week, so I will have limited time to work on it, but will see what I come up with by the weekend. I’m not expecting this to be earth-shattering, nor just some sort of cheap “workshop” gimmick/exercise, but an exploration.

More to come (or if you're curious to read in advance, you can always read here...)
Posted by Brian Campbell at 1:36 am