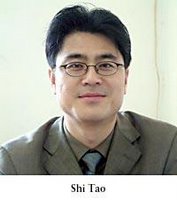 A leading Chinese advocate of internet freedoms has issued a scathing denunciation of the US portal Yahoo for its role in helping Communist authorities to prosecute an independent-minded local journalist, jailed for 10 years for “leaking state secrets”. Veteran dissident Liu Xiaobo, in an open letter to Yahoo co-founder Jerry Yang, accuses the US company of betraying its customers and supporting dictatorship by providing information on journalist Shi Tao to Chinese authorities.

The letter is rather long but I think it's important reading, as many people use Yahoo.

For those who are not up on this story (I wasn't, until this morning), here's a link to the original Reporters Without Borders report that first brought this case international attention, + coverage by the Washington Post and the BBC.
Posted by Brian Campbell at 9:04 am