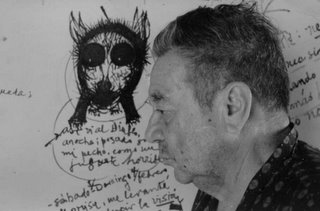 Here's a poet to discover: Carlos Martinez Rivas. Considered by many to be the greatest Nicaraguan poet since Ruben Dario -- although others would contend
Pablo Antonio Cuadra would better deserve that description -- he only published one book in his relatively long life, a staggering masterpiece called La insurreccion solitaria, which would translate as The Solitary Insurrection (published in 1953, republished with additions in 1973 and 82). Critics compared him to Octavio Paz and Charles Baudelaire, he won international recognition, and when he died, was given a
state funeral. Just on the strength of that one book. (Talk about a different culture than this one...)

So happens he was a friend/mentor of Francisco Santos, who describes to me unforgettable meetings he had with him at a certain bar named "Buenos Aires" in Aranjuez, Costa Rica, where Francisco stayed for a time after the earthquake leveled Managua in 1972.
Francisco describes him as a flaming genius, the greatest poet he ever met.

It seems that Mr. Rivas left behind him over a thousand unpublished poems, the vast majority of which have not yet seen the light of day. The reason for his non publication? According to this bio, he had an almost pathological fear of errata -- and anticipated public rejection. After last week's experience, I can relate. (At least to the errata part... well, rejection smarts too!)
Posted by Brian Campbell at 10:34 pm

I sense a new translation project on the Horizon.

Possibly... I'll have to get my hands on that book to see if I can turn it into compelling poetry in English. As you may see, after talking to Francisco this afternoon, I added some detail about their meetings...

I knew Carlos Martinez Rivas more than 50 years ago when both of us spent many evenings at Octavio Paz's apartment in Paris. Elena Garro, who was then married to OP, always called him El unico Carlito. I remember reciting Apollinaire's Chanson du Mal Aime one night looking towards the Eiffel Tower to him and to Ernesto Cardenal. Then, we all scattered, and some of us never met again. Some years ago a Peruvian friend gave me sad news of Carlito and the devastating drinking problem that was destroying him. (No judgment here, my own husband died of it.) That may be why he never again published. To my shame I did not know that he had published to book you mention. I just googled him by chance after having pulled out of a box a picture of Octavio Paz and myself taken by a street photographer in Paris at that time and wondering what had happened to Carlos Martinez Rivas. I did not expect to find this much. Thank you.
Monique Fong

Francisco was telling me the other day was that CMR never published beyond that one book because he was fixated on the idea that a poet should only be known for one book -- like Whitman for Leaves of Grass, for instance. He intended to put out an expanded edition of Insurreccion Solitaria -- as Whitman had done with Leaves of Grass -- but was never satisfied with the configurations he put together. Certainly, though, he was also disabled by his alcoholism.

Thanks again for sharing that with me.

Drinking is always so complicated . . . Anyway, here's another "sweet" memory of Carlito. Some of us had spent Christmas eve 1950 (!)at Octavio Paz's place and were walking the quiet streets of Neuilly singing, in Spanaish, while CMR was playing the guitar. This was allowed on account of the holiday. Not much of a memory, but an image of another time and place.
Monique Fong

Thanks again, Monique. I think I'll make a post out of these reminiscences... something about how the net connects, and who would ever expect, etc.

And thank you, Brian, for reconnecting me with CMR, etc.And do you know Alejandra Pizarnik? I only discovered her recently even though we sometimeswere in Paris at the same time.