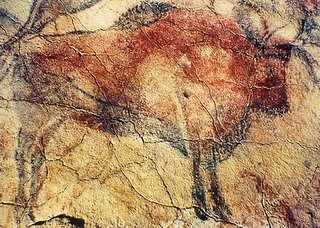 Hall of Bisons, Altamira
Yesterday my site meter told me I passed 10,000 visits*, since I began a year ago late Sept. In addition to the previous incarnation of this blog at Blog-City, that makes about 14,000. Not bad for someone who had the sensation, when he began, that he was painting inside a cave -- to be discovered at some uncertain future date by some curious seeker armed with temerity and a virtual flashlight (not to mention lots of idle time). It's that cave feeling that made me choose black for my blog, so my words and images would become like the "silent whisperings of the arrayed handprints in the caves of Altamira," to quote a line from a poem by Francisco Santos.

Obviously there are a lot of curious seekers out there. These numbers sound like the attendance at a major art gallery show -- but what do they really mean? Right now, whenever I post, I get a spike of anywhere from say five to thirty hits from blogs I don't know and am likely never to see again -- names like Joe's Golf Blog, or Kill Kill Kill or Mitsuki's Day at School. I assume my postings appear on lists I'm unaware of -- not just the "recently posted" list at Blogger. The secret to inflating one's numbers -- if that were one's sole purpose -- would be to post several little tidbits a day. There have been days, though, when I've gotten a storm of visits for no apparent reason -- i.e. 35 in one particular hour last July, a month when I wasn't posting at all. This phenomenon was especially frequent during a short period when the blog spam-bots were blamming us like mad, before the advent of so-called "word verification" (that is, gibberish replication) in the post comment feature on our blogs.

By far my most popular post, by the way, in terms of Google searches etc., has been one entitled "The Largest Organism on Earth". I think I've gotten about 500 visits for that one alone. For some reason my post was listed at the top of that weird category for about two months. Another secret to increasing your numbers: post something that gets to the top of an unusual but relatively high-interest category. A post about Jon Stewart's Daily Show, of presumably much more popular interest, didn't get a single search hit... I guess because it's at the bottom of a stack of postings and URLs about him.

We with the site meters can become addicted to watching them. The meters become quite fascinating in themselves. My own site meter has a new feature where I can see the last 10, 20, 50, or a 100 visits I've had on a world map. I've seen visits from Cairo, Jakarta, Tokyo, Bangalore, Lagos, Copenhagen (I know who most of those are from -- a well-hit Basbøll), Sao Paulo, Beijing, Stockholm, Managua, Manila, Santiago. The vast bulk though come from North America, on average about 30% from Canada, 60% from USA. If my site meter is a true reflection, world-wide web is densely stitched over this continent, with a few strands stretching elsewhere. I'm surprised at how few of those strands come from England -- about as many as from Sweden, around 1-2%. What's with you Brits?

As for you, you, you, you and occasionally you who leave comments -- David, Pris, Nick, Peter, Lorna, Gina, Charles, A.D., AJP et al, thank you thank you thank you. It's for the likes of you I write. I truly enjoy and appreciate the feedback. But if I were always getting "O" in my comments box (as is pretty frequently the case, just scroll down), I'd be posting anyway. Anonymity, presumably, didn't stop the cave painters -- why should it stop me?

* as I remember, according to my site meter's definition, visits are not just hits, but include several hits from the same URL within a half hour period.
Posted by Brian Campbell at 11:58 pm

Email ThisBlogThis!Share to TwitterShare to FacebookShare to Pinterest
Labels: This Blog

I've got a somewhat random-seeming question for you: do you know a historian named Anne Rubenstein? I believe she teaches at York, and--when I was scrolling down through your site tonight--I noticed that you're around there occasionally. I'm just wondering.

Actually that reading with Francisco Santos last month was the first time I had set foot on the York University campus in 20 years. So if the word occasionally can be stretched to mean "on a grand occasion", well, yes.

Thanks for the virtual cheer.

lol. No relation that I know of.

Interestingly enough, I studied with a student of Artur's for a short while. He (Artur, not the student) was more than respected; he was revered. I wish I could get my hands on a recording of his interpretations and such.

Actually I looked up the man... his last name was Rubinstein, not Rubenstein. (Possibly Anne's is too.)
At home, I grew up with a recording of one of his "warhorses" (as he called them), the Rachmaninoff 4th, and Beethoven Sonotas as well. I also had the good fortune to see him perform (on TV, but it was good for closeups) in his 86th or 87th year, just before he retired from the stage. He was a great, warm romantic interpreter of those 19th C. titans, whose eyes literally welled with tears when he played slow movements. Unfortunately those recordings of ours probably sound like they were recorded on cracked wheat toast now.

...then, maybe it was the onion under the piano.

He made himself cry?

There's a poem in there somewhere: someone so good that he makes himself cry when he plays. Don't you think?

Actually, fashionable cynicism and anti-sentimentality aside, I think your poem idea is a good one. Let's see what we can come up with in the next few days, shall we? (Now I'm beginning to sound positively British...)

You do realize that I can't actually write... don't you?

Not a collaboration I had in mind. Let's just see what we can come up with on our own in the next few days. By the way, i also can't write, but I type awfully good -- even my errrores are interesant. If keep our standards low -- expecting nothing at all -- and we'll surprise ourselves. Game?

Hi Brian
Back to the stats. I have a lot of hits, too, which constantly surprises me. I used to use a bravenet hit meter and it showed the source of the hits. A friend showed me how anyone at all savy could enter my main posting board by looking at hits and spotting when I'd just published one since the 'source' would be my admin board. Took it off, so now I just have to wonder:)

I find that's rather weird, Pris. On this site meter you can fix it so it doesn't record hits from your own address, although I find it's inconsistent in doing so (sometimes it records hits from Montreal that correspond to the exactly time I went on, and sometimes not). I've never seen a source reference to my posting board, which of course requires password & identification. But this site meter, as I recall, has special procedures for sign-up with Blogger blogs, so maybe that sort of access is blocked...

Not that I expect anyone to read this (considering most comments above are almost 5 months old now) but I stumbled upon this site looking for a list of beethoven sonotas and read Mr. Campbell's comment about someone crying while playing slow movements.

While you have joked about this, realize that people are often deeply moved by music, especially Beethoven's (the 9th symphony?). I myself find Beethoven to be one of the deepest and most emotional composers I've ever listened to. His music speaks to "my soul" in a way I cannot explain. No other music says so much to me.

I have cried while playing Beethoven before. Maybe I'm just a wuss, who knows. But I hope you can appreciate the feeling and emotion that is evident in this musical genius's work.