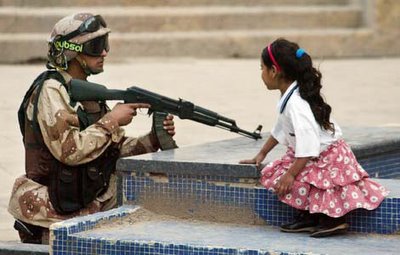 This is not normally a political blog, but who's to separate art from politics?

Today upon looking over cbc.ca for news on the fate of those four unfortunate aid-workers who have been kidnapped in Iraq (yesterday was the announced deadline for their execution, but as yet no word has been heard on whether their captors have followed through with their ultimatum), I came across this backgrounder on the history of Iraq. For me, at least, it was an eye-opener on a history of which I was at best only dimly aware.

According to this article, much of the the present misery can be dated from the carving up of the the Ottoman Empire by the British and French after WWI. As in Africa, this arbitrary divvying up lead to a kind of ongoing civil/international war -- which of course oil and American (OK, let's say Western) intervention have exacerbated to an unbearable degree. As much of the history of Canada can be told through the history of Quebec (an odd comparison, perhaps, but one which comes quickly to mind to one living here), so this is a very telling perspective on the history of the region. It's about colonization gone wrong. It's about feeding flames that lead to conflagrations. Etc. I won't say more. Just read.
Posted by Brian Campbell at 2:11 pm