Marie Chouinard: The Aesthetics of Prosthetics 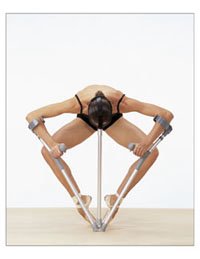 On Friday night, my partner and I saw the Marie Chouinard Dance Company's "bODY_rEMIX/
gOLDBERG_vARIATIONS", at the Place Des Arts here in Montreal.

Since she came onto the Montreal dance scene in the late '70s, Marie Chouinard has grown from enfante (adolescente?) terrible to an force of international renown in the dance world. My partner remembers seeing her early solo show Cru (Eng.: Crude), where she shocked audiences by dancing in the nude, slathering her body with mud and urinating into a chamber pot on stage. Nudity and shocking sexuality have frequently been a feature of her creations. But they have also featured the most cutting-edge technical innovation as well as profound emotional exploration. So when we saw the striking image above on the cover of one of the local entertainment papers and read the interview inside, we decided it would be damned interesting to see what she's having her dancers do now. (Chouinard now choreographs and runs the company, having retired from dancing a few years ago.)

What we saw included some spectacular moments -- her 11 dancers are of the highest calibre, and she puts them through some gruelling paces and seriously complex configurations. The dance revolved around the use of prosthetics, canes, walkers, as well as ropes and points. Dancers hobbled about, soon found their form, and at one point (a beautiful ending to the first half), celebrated, jumping, laughing, flying through the air. There were comic moments as well as some haunting ones. But it seemed to us Chouinard explored the aesthetics of prothetics without getting into the real emotional stuff -- the pain and social exclusion that is the lot of those who rely on such aids every day, as well as the suffering we all experience, being handicapped of sorts. From the start it was clear that these were splendid dancers in fantastic shape who didn't need these aids at all. The walkers and canes were simply "extensions of energy", as Chouinard put it in the interview.

An abstract dance interpretation of remixed samples from Bach's Goldberg variations played by Glenn Gould, along with highly distorted (that is, frequently unintelligible) excerpts of an interview where Gould pontificates things like, "Music played with an inflexible -- absolutely inflexible -- rhythm is possible, but is really not music at all" -- this piece was a rather cerebral statement of art about art as much as anything else. As sleekly sexual as her dancers are (and most of the time they were about as close to nude as possible), the dance was at only rare and fragmentary points erotic... this is not meant as a criticism, but a thing I found interesting in itself. It seemed that, as in a number of contemporary dance pieces we've seen of late, there were lenthy, highly complex sections that were quite redundant, that could have been lifted right out of the piece without harming it as a whole. Were they there to fill out a two-hour show?

This morning I was thinking that if there had been a drama in the piece, a relationship, a part where a dancer seems truly in pain as she hobbles around, shunned by another or by a healthy crowd, followed by some sort of resolution, that could have enhanced the experience -- created an opportunity to explore such themes as determination, compassion, etc. Such a concept probably never crossed Chouinard's mind. As one professional dancer told me, compassion is not exactly Chouinard's strong suit.

The crowd I have to say enjoyed the show. It gave her an ovation that expressed more veneration than genuine excitement. We, like this reviewer here, didn't feel inclined to join in. It seems to me Chouinard came up some great ideas, but missed an opportunity to explore a central theme in depth.

For a more positive review which evokes with great eloquence some of the movements of the dance, this is a good one.
Posted by Brian Campbell at 6:04 pm

She does sound fascinating and bold. I would feel the same as you about the handicapped portion, though, ie an opportunity to show something more meaningful, lost.

She's also a dynamo of ENERGY. She's done more than 50 full-length dance creations in the past 30 years. So if she missed out this time, it's on to the next thing...