Last weekend, besides seeing Marie Chouinard Dance Company go through its paces at La Place des Arts in Montreal (see post below), I also attended a lecture by Robert Duncan at Naropa College in Boulder, Colerado. It was pleasant being part of the audience, people around me caughing and shuffling their feet, rising to ask barely audible questions, or laughing at his jokes (sometimes I chuckled too). A fair number of these people are probably dead, as is, of course, the lecturer. Occasionally cars purred by that have long since been to the junkyard, and I think I heard a plane, possibly heading to Denver -- the windows were open, so it must have been some time in early Fall or late Spring. Attending a lecture of 25 or 30 years ago is one of those things, of course, you can easily do nowadays via a medium that Duncan, eminent spiritualist though he was, could never have possibly imagined. Like the University student I haven't been for decades, I kept assiduous notes -- this time, not on a notepad but on a computer screen.

Duncan was a fascinating and entertaining lecturer, whose nervous stuttering staccato could barely keep up with rapid-fire associations in his head. Frequently, almost willy-nilly, he went on tangents, but the theme and direction were nearly always clear. Today I touched up my notes, added paraphrases here and there to make them at least somewhat intelligible. Since the lecture, entitled Warp & Woof, Part 1 (I was unable to find Part 2) is more than an hour and a half long, I thought you dear readers might benefit by scanning this synopsis of most of his main ideas, as well as a number of thought-provoking curiosities that came out along the way:

Imagine a warp and woof, as of a fabric -- imagine it going throughout the universe
The warp & woof of the "true" and fabricated universe
The word poetry: Greek word for making something up
"Song" -- canto -- entirely other origin, aspect
Semitic community (Judeo-Christian & Moslem world) was in for quite a shock when it came in contact with this decadent Greek idea of a made-up world
Greece had doctrine of inspiration
Semitic world, on the contrary, was opposed to graven images, making things up. In that tradition, one should not "make a poem", but speak with a poem that comes from your voice, heart. Prophetic, vatic voice.
Duncan himself: a product of the Celtic and Jewish trads. + Greek idea of making up.
Sappho
Christian world: felt there was something profoundly wrong about making up things & persons. Only in Rennaissance was "making up" returned to prominence
Shakespeare (Tempest): Universe a stage. A master maker.
The germanic word for poet is maker too.
Story tellers thought of themselves as makers; talk about weaving a tale. (Goes along with weaving cloth): story you tell as you weave cloth. Minotaur; maze.

In happy Jung land: you aren’t making things up once again. Psychoanalysis: archetypes: not made up. Lady Macbeth’s archetypal standing less interesting than the made-up aspect.

Duncan suggests (jokingly) an alternative to the Oedipus complex: the Jocasta complex: mother aint’ going to leave the son alone.

An ecclesiastical work is not "a making up"; it is a vision of what is there.

Homer: Penelope: every day weaving a design of a plot; all a work

In our own Judeo-C world, word “craft” is even yet filled with apprehension: as in crafty
Craft is a cunning little animal: one you tame so it won’t bite you

Ezra Pound: all human spirit is identical, consubstantial. All times contemporaneous. We evoke a presentation.
Cocteau: Pound is the last rower on the sacred river of Arabus.
Lowest rung of heaven is hell.
Limbo is the conventional world, a world world where love is good, war is bad; the world of the 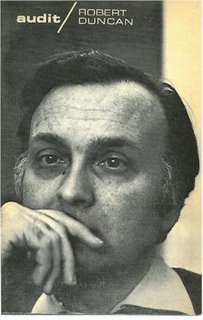 We don’t have such a thing as imagining, without being recharged by understanding.
(Psychoanalysis: fantasy is called making things up)

We’re in a fabric of time and space. People 40 yrs. from now will not be buzzed by the same buzzes of now.

Celtic traditon of the bard – keeping alive the identity of the tribe. Now bardically, the poet must keep alive our identity in the universe.
We leave an imprint. We devise a design in a poem, but it is like a footprint out of which you extrapolate an entire dinosaur.

Conventional dictum “Write with your true voice.” Don’t come on like an immitation Robert Browning. But if you do immitate well, you are yourself anyway. Imprint.

“What do you think of this” = will you think about this for me.

No matter what I think I say, the words say other things: storehouse of impressions.
You cannot take a thing you feel and put it into language.

Say Cow – that’s my cow, but not really your cow.

One of our communities is language.

Everybody has this notion of emptiness. Language has a term: nothing. Language tells us we’re individuals. That’s not our idea. We discover ourselves in commonality.

Idea that archetype is in you, nothing like the idea that it’s in language.

You’re in the hands of the peril of the universe when you are in health. Being sick: getting with the program, as it were.

Eripides not in the web; Shakespeare is. E. limited by notion of catharsis. S. creates a world; gives eloquence to all virtues and vices in the web.

Creely poems frequently have no images. Shakespeare: no images in “To be or not to be”
What was an image? Nexus of when a person... (forgot to finish my note here)

We are not warp nor woof – we are holes (between warp & woof).

We think of Whitman as "big superdaddy poet", not as leaves of grass, one of millions, which was his view, ultimately.

A love song with language rather than notes.

Writing a sonnet – doesn’t require faith. Playing tennis with the net up (Frost). But being is a different game – hard to know when you are playing being.

Loyalty is not faith.

There’s a flow – because there’s a language and going on in our heads all the time -- continuously of poems – an artesian well of sorts – but the art of poetry is actually a structure to prevent us from being plunged into the absolutely everlasting generative field that language is. It is of high magic field, it is a form of evocation. You get inside a pentagon – because you don’t want to be swamped by the whole spiritual world. A sonnet (or any other poem) like making a little garden inside the language. In the sonnet, love and the erotic brought close together in a relation. This is the grand attraction of magic: bringing things together in a circumscribed area. In the grand web (warp & woof) of the universe : love and sex not even related much of the time. We’re back to leaves of grass. We don’t mourn the loss of one leaf. Rationality, too, is a grand magic, which makes sure all its own demons remain present while the rest are consigned to the realm of the “irrational.”
Posted by Brian Campbell at 2:05 pm

You have a way with words! Keep up the good work!