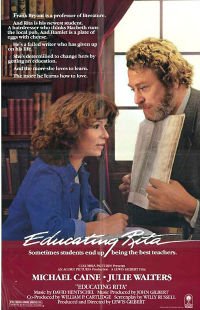 In the 1983 film Educating Rita, Rita (Julie Walters) asks Professor Frank Bryant (Michael Caine) the meaning of assonance. Here's an excerpt from the script, which believe it or not, I was able to find on the net:

OK, you students of verse, what's wrong with this dialogue?

Well, what the professor is actually describing is consonance, which according to my Holman's
Handbook, is the use of words in which the final consonants of stressed syllables agree but the
vowels that precede them differ, as in "add-read,", "bill-ball," and yes, "swan-stone."

Assonance is the resemblance or similiarity in sound between vowels followed by different consonants, as in "lake-fate," "dike-knight", and "trodden-cobbles."

Personally, I prefer my own definition of assonance: the sound assholes make when they're
describing slant rhyme.

It was a delightful movie, by the way, charming and witty and profound by turns (I rented it last night). Michael Caine and Julie Walters were perfect for their parts. Highly recommend this one, as (yes, it has become) an old-time treat.
Posted by Brian Campbell at 12:27 am

It is a great movie. I just got it from Amazon earlier this week (it only recently came out in a new DVD edition).

It's still one of my favorite movies about teaching because it raises some important questions about teaching. And I taught English for a number of years and was sick of the snobbery, just like Frank appears to be. Maybe being a poet in an English dept. is just a bad idea.

You have to be a good poet indeed to weather the storm -- and that includes the onslaught of analytical thinking in academia. Some manage to, despite themselves. Gotta hand it to them.

A six year old post, but I found it while watching Educating Rita and trying to figure out if I really did have it wrong what assonance means.

I want to point out that Frank getting it wrong may be on purpose in the script. Just before the scene, Rita passes the students joking about someone who doesn't even know what "assonance" means, and that's why she asks Frank what it means. In the later scene when Frank brings it up with Denny, Denny's definition is correct and Frank doesn't notice that it is different from the one he told Rita.


I love this post, and I was absolutely thrilled to see the other links that you published that go along with this topic. Thank you for sharing your thoughts. I am happy to be a new follower. :)